Less is more. Why Marvel's decision to increase Iron Man 3's budget by $60 million may not be a net-positive. 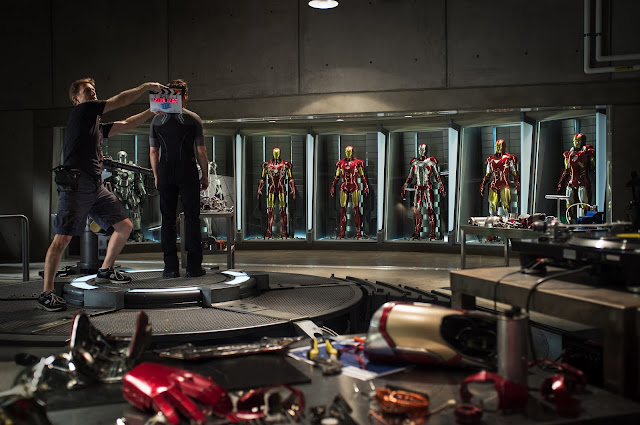 This is old news, but it broke while I was busy and I suppose the release of the first official still is as good a time to discuss this as any.  Despite commentary running up to the release of The Avengers swearing that Shane Black's Iron Man 3 would be a scaled-back and character-centric affair, it now appears that the eye-popping success of The Avengers has changed the template over at Marvel.  The film's budget of $140 million has now been raised by a whopping $60 million, so that it will now cost $200 million assuming everything gets done on time and on schedule.  Instead of promising a low-key character drama loosely based on "Extremis", Iron Man 3 is now intended to be the biggest Marvel movie yet!  Iron Man 2 cost $200 million and still felt incredibly small-scale and the $140 million Captain America was the only pre-Avengers film that actually felt 'big'.  It's not that money can't buy quality or anything obvious like that, it's the idea that money wrongly applied and/or given to a film purely because it can be sometimes does more harm than good.

Yes whatever extra money was giving to The Avengers to punch up the film's action finale was obviously well-spent, and I can only wonder what extra action beats or special effects were added after the fact to make sure that the super hero team-up felt like a big f-ing deal.  But money does not always help the cause.  As some of you may recall, Fox's Daredevil was originally intended to be a $50 million R-rated street-level crime drama.  If you've read the source material, that's about right.  But the surprise mega-success of Sony's Spider-Man several months prior led Fox to the unfortunate decision to sink another $30 million into the film by way of elaborate special effects in a sad attempt to mimic the high-flying adventure seen in Spider-Man.  The final product (a butchered 100-minute PG-13 travesty) was immediately torn to shreds by critics and mostly abandoned by audiences after a fine $40 million Valentine's Day 2003 opening weekend (it barely crossed $100 million in the US, a quick-kill blockbuster in a time when movie-going wasn't as front-loaded).  Even if you go back and watch the vastly superior 133-minute director's cut (with an entire second act restored and overtly R-rated violence put back in), the stuff that still sticks out are the fantasy bits, for example the way Matt Murdock seemingly flies through the air as he hunts for criminals.  While the restored version of Daredevil remains a rock-solid superhero film, it still has issues, most of which are primarily due to money that was spent purely because it was offered.

It's not just superhero films that have fallen victim to this.  It's no secret that I rather adore Disney's The Sorcerer's Apprentice.  It's a light, fun, and exceedingly well-written little fantasy adventure that features wonderful chemistry between Nicolas Cage, Jay Baruchel, Alfred Molina, Teresa Palmer, and Toby Kebbell.  But it is at heart a small film, so the big-scale action sequences and special effects that drove the budget to $150 million feel almost out of place.  And it is because of that exorbitant cost that the film's $215 million worldwide gross isn't enough to prevent it from being labeled a flop.  The film works because of its knowing sense of humor, clever dialogue, and pitch-perfect delivery.  Does anyone think the film would have suffered without a chase scene involving a giant fire-breathing dragon in the first act?  Or an extended sequence that openly apes the Fantasia short from which the film takes its title?  Not every genre film needs to be the biggest spectacle of all time, something that studios in general have been learning over the last year or so.    Journey 2: The Mysterious Island cost just $80 million, making it a smash at $321 million worldwide.  Does anyone think that a $150-$200 million version of Journey 2 would have been more popular and/or a better movie?  Mission: Impossible - Ghost Protocol is one of the best action films of the last decade, all at a cost of $140 million, or $20 million less than Mission: Impossible 3.  If Marvel thought it was able to make a rock-solid character-driven Iron Man 3 for $140 million, throwing $60 million at the film purely for enhanced spectacle will create only that: enhanced spectacle.

With $200 million on the line, Iron Man 3 now *has* to be as successful as Iron Man ($585 million) and Iron Man 2 ($623 million) at the box office.  Marvel's decision may in fact work out for the best.  We may get our introverted Tony Stark story with a couple extra action set-pieces thrown in for good measure.  The film may be as much of a success as the first two films.  But Marvel had a chance to show the industry that a superhero sequel could be a low-key, smaller-scale affair and still deliver the entertainment value.  But instead they fell into the 'bigger is better' trap. Marvel and/or Disney are throwing $60 million more into a movie that was all set to go at $140 million, a film that would have been a huge hit no matter how relatively low the budget was.  They've now created a template where each Marvel film has to be the biggest mega-bucks action spectacular thus-far. It's not a healthy template and it's one that will see costs rise ever higher until they are beyond the realm of plausible profitability. The goal should be to craft the best-written, best-directed, and best-acted movie you can for as cheaply as you can justify.  It shouldn't be about burning money onscreen purely to show how much of it you have.

Your turn.  Were you excited by the idea of a low-key Iron Man sequel or has the notion of a mega-budget Iron Man 3 only increased your interest?

This is nitpicking, but... Journey 2 would have been better with a bigger budget. I moderately enjoyed the first Journey, so I checked the sequel out, and I literally found nothing enjoyable about it. With more money they could have potentially had some fun action sequences. Or a good writer.

A low-key, small budgeted Iron Man film based on Extremis excited me after the first film. As it stands now, just wake me when Avengers 2 happens, even while secretly anticipating Thor 2, since his character is really the only character that has anything interesting story left to tell.

Marvel's problem is budget, although it is a problem. It's goal posting to get everyone to these Avengers films that's the real problem. I know Feige has been talking up the notion that the sequels that follow the Avengers have to be their own films but he said that during the lead up films to Avengers. Why would Marvel change a template that kind of works for them, in term of box office?

By goal posting, they've essentially dropped the stakes for each of these character's films. As you said either in your Avengers review or a lead up editorial about it, by announcing sequels before audiences saw Avengers, they essentially zapped all the drama out of the film. Why watch all of that when we know the Avengers films are the ones that actually might change and grow the characters?

Funny enough, I recently revisited X-Men the Last Stand after having not seen it since it debuted six years ago. And, as wrong headed as that film is following Singer's two great pictures, at least it had stakes, drama, and a growth of the mythos and universe by the end of the film. 3 beloved characters get knocked off and 3 others get cured by the end of it. Again, still not the proper third X-Men film but Ratner put really stakes and drama in the film.

I wish the Marvel Cinematic Universe would at least try it. Like you said in your review, Thor should've killed Loki in Avengers. That would've added something, anything to the climax of Avengers.

What worries me is that with the mainstream success of the previous Iron Man films and the enormous success of The Avengers, they are possibly going to play it safe.

When RDJr was announced as Stark, a lot of us were excited about the possibility of having Stark's fight with his inner demos be a reflection of that of the actor's, that he would be able to paint that inner conflict in a way that some other actors couldn't.

Now it looks like the idea of actually developing the "demon in a bottle" storyline with the proper seriousness, is a lost battle. That would be disappointing. A case in which the success of a film franchise, could possibly end up crippling the films, denying them any chance of true greatness.

So the budget is going to be the same as Iron Man 2's? That doesn't seem unreasonable. Yes, obviously how the money is more important than how much is spent, but I disagree slightly with what the goal should be the goal should be to craft the best-written, best-directed, best-acted movie with the best action scenes that you can afford at a justifiable price. There are plenty well written, directed, and acted movies that win Oscars every year that "nobody" watches.

That is indeed a bummer. Too often the more-is-more stupidity of Hollywood almost guarantees a fail. Creativity often comes from a restriction of some sort - money being the most obvious. "How can I do X and Y with only Z amount of money" - this creativity leads to unique, inventive filmmaking methods that don't just hit the box-office but also ensure longevity and uniqueness to the film itself. Real shame indeed.

Feige has stated upfront (indeed Favreau did prior to IM 2 being released) that the Stark alcholism storyline will probably never be adapted for the big screen.

Marvel's entire strategy has been to build upbeat family friendly pictures and the success of THE AVENGERS ensures this will continue.