Bad films have good ideas too. Or why Prometheus shouldn't get a token pass for its 'big ideas'. 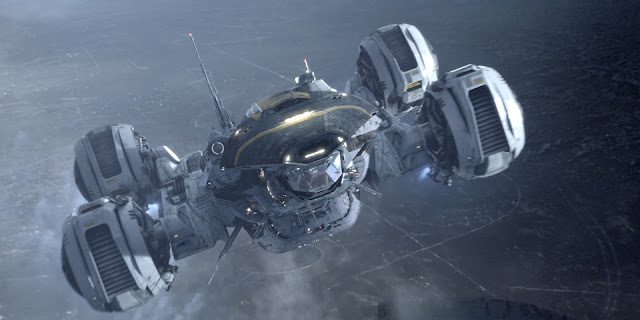 Here's a newsflash: Most movies are inherently about 'something'.  Art films are about 'something'.  Studio prestige pictures/Oscar-bat are usually about 'something'.  And yes, even mega-budget studio franchise entries are usually about 'something'.  There is a notion running around the Internet that Ridley Scott's Prometheus should be graded on a curve because it technically has a few 'big ideas' in its screenplay.  And yes it does indeed play around with concepts involving the origin of human existence, the motives for our apparent creation, and what our beginnings say about what we have or have not evolved into.  We can argue about how well they are developed, how they mesh with the pulpier genre elements, or what extra depth the inevitable (and just announced) extended Blu Ray cut will provide this Fall.  But I didn't come here to re-critique Prometheus (review).  That it has ideas, be they big or even good, is not automatic justification for forgiving the film for its pretty glaring slights as an actual story/character narrative.  Moreover, the "But, it's actually about something!" defense is rooted in a long-standing critical falsehood, the concept that most movies are bereft of thought, ideology, and even basic ideas.  This is false.  And this falsehood is hurting how we look at movies in general.

We presume big-budget blockbusters are brainless because it's an easy thing to believe, so distracted as we often are by the bright lights and loud noise of the modern would-be blockbuster.  But just because a big-studio tent pole is bad doesn't mean that it is automatically stupid.  Moreover, the existence of interesting concepts, even new and challenging questions, does not excuse what amounts to bad film-making.  Even if Battleship really is a satirical critique of American 'sorry we blew up your village with our drone while keeping you safe from terrorism' foreign policy, it's still an uncommonly bad film.  For that matter, that The Avengers really isn't about anything more profound than 'teamwork is cool!' doesn't prevent it from being a completely entertaining adventure film thanks to sharp acting, strong writing, and some solid action sequences.  But if I tell you that Jonah Hex functions as a scary parable for a militarized Tea Party, does that excuse the film's butchered incoherent final form?  No, but it just means that Jonah Hex is a bad movie with some scary and relevant subtext.  And we can all debate over whether any of the Transformers films were 'good', but calling them brainless spectacles ignores the rather obvious Neo-Con propaganda at is core (the entire trilogy is a metaphor justifying our invasion of Iraq and arguing for permanent occupation).  It doesn't make Revenge of the Fallen a good movie, but it makes it as much of a political film as Lions For Lambs. 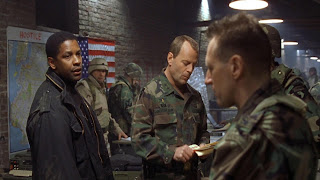 There are a exceptions here and there (G.I. Joe: The Rise of Cobra and/or Airplane! come to mind), but very few films have nothing to say at the core of their story.  They don't have to have explicit political moralizing (Prince of Persia: The Sands of Time) or on-the-nose social commentary (Milk), but most movies darn-well have something that they want to say other than providing pure visceral entertainment.  Be it subjective opinions about family relations, would-be advice about finding and keeping love, the constant battle between dangerous freedom and theoretically increased safety, thoughts on religion, or a fictional dissection of the filmmaker's thoughts and feelings about their lives, even the biggest blockbusters usually have a few thoughts in their 3D or IMAX-enhanced heads.  But the critical community at-large is so adamant in its belief that big-studio films don't have anything to say that they are all too willing to ignore the subtext that is often just-beneath the surface.  Critics ignored the obvious political parables in the first two Star Wars prequels only to decry the somewhat heavy-handed moralizing in Revenge of the Sith.  Worse yet, they all-too often insist on reading a film only at face-value even if the real meaning is right under their noses.  Hence Sucker Punch is a misogynistic geek-masturbation fantasy and The Siege is about how scary Islamic terrorism is, no?  We are now at the point where we not only presume that all blockbusters are brainless but we actively condemn the more challenging genre fare because we presume that the only correct reading for a given studio entry is the simplest and/or shallowest one.

The first Crank is a tragedy about a man who realizes the error of his outlaw lifestyle on the very day he dies. Hook is Steven Spielberg's thesis on whether or not he can be a filmmaker and an active parent.  Madagascar is a spot-on look at proverbial 'city slickers' being dumped into a natural/survivalist environment while also operating as a classic western.  The Island is a giant metaphor for the 'abortion is the genocide of the unborn' argument.  X-Men: The Last Stand is a look at how a seemingly righteous organization functions when their seemingly perfect leader loses the moral high ground.  Batman & Robin is a look at how an orphan comes to terms with being a surrogate father while coping with the apparent death of his own surrogate father, with the eventual message that those who can't accept the loss of loved ones become dead inside. We can argue the artistic merits of the above offhand examples, but they are all clearly about something more than their surface-level pleasures, even if their thesis statements are not always articulated as well as they should be.  I bet if I told you that XXX2: State of the Union operates as a chilling look at a right-wing politician committing murderous treason due to not accepting the legitimacy of a more progressive leader (which wasn't entirely implausible back when there was worry that an indoctrinated armed forces wouldn't serve under a Democratic president after Bush/Cheney), you'd still tell me it was a bad film. We'd both be right.

It's nice that Prometheus has 'big ideas' at its core.  But it's still a bad film with only a few interesting characters and a generic narrative.  It fails to articulate them beyond surface-level acknowledgment and thus deserves little credit for merely name-dropping its origin-of-creation philosophies and saving the real meat-and-potatoes for an extended cut of the film (and/or an alternate story idea that never made it to film).  Prometheus puts its concepts front-and-center, arguably placing them higher in value than the characters and the story.  Had Ridley Scott and Damon Lindelof made an effort to ground the film in a story worth following and characters worth caring about, we likely would have had a better movie.  The film's (relative) apologists are more concerned with what it's about rather than how it's about it.  But ironically, had the film played its philosophies a bit subtler, there is a good chance that any number of critics would have missed them and written the film off as a brainless spectacle.  Most films, good and bad, big and small, aren't truly brainless. The only reason that critics/pundits are in a rush to applaud Prometheus for its big ideas is because they have conditioned themselves to believe that most movies don't have any ideas at all.

Interstin thesis, but what was The Next Best Thing about, other than Madonna's narcissism and having one of the worst/most heinous endings EVER?

This. Haven't seen Prometheus yet, but big ideas don't make a movie.

I don't know how much you can argue Madonna's narcissism when she basically plays the villain during the aforementioned third act of the film. As for the (vastly underrated) film, it's a family drama that eventually becomes a sober look at how kids complicate a relationship and how far from mainstream acceptability gay dads were back in 2000.

GREAT POST! I personally love trying to pull out those levels of thought behind a film, but one comment with regard to PROMETHEUS sums it up: "It fails to articulate them". PLenty of films have interesting subtexts and if it is consistent throughout the film, it often stands. But bear in mind, I LOVED PROMETHEUS and I think all the criticism is from people who are analysing the film too literally. People questioning the plausibility of sequences - in a science fiction film. I have heard alot of criticisms but none of them have changed my mind. As an example, [SPOILERS] people moan about the 'producer-led' final shots - as if it is some cheap attempt at connecting the film to the franchise. I disagree. The different characters represent something each, and the 'tacked on ending', I believe is showing how 'the created' defeating 'the creator' can only breed evil. If we believe WE are the Gods, we will only destroy ourselves through our own evil.

I could mention other criticisms (E.g. We are supposed to be ambigous about Davids motives in killing Holloway - is he robotically deeming it neccessary to kill him for weylands goal of exploring immortality ... or is he choosing to kill someone who despise him?)

A film that makes you think so much is a great thing no?

actually I can't seem to get this film out of my head two days later but , like a dream, it doesn't make coherent sense and the big ideas explored didn't resonate with me at all...started great, the 3d worked fine for a change, loved David8 and the cobraesque oilsnake but it was clunky and didn't think Rapace connected anywhere near Sigourney Weaver (and though a fine cast they didn't emerge the iconic characters of ALIEN)...was there anything to live up to Harry Dean Stanton silently stalked in the engine room even though the alien was in plain view the entire time? or Cartwright's out-of-her-mind state of terror and just the whole WTF suspenseful atmosphere of not knowing what could happen next...PROMETHEUS failed to provide the emotional involvement and state of wonder and sense of intimacy/isolation/claustrophobia that permeated the Nostromo...ALIEN wasn't intellectual but visceral emotion...I look forward to a director's cut and a sequel to PROMETHEUS but I actually prefer even ALIEN VS PREDATOR to the second half of PROMETHEUS because it knew its limitations of being a thrillride in loving awe of its creatures without all that pretentious spacebabble getting in the way of a basic storyline that showcased those critters in a workable, streamlined presentation