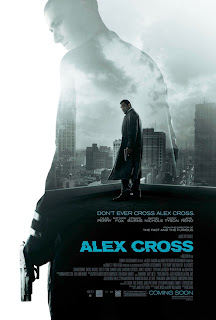 It's no secret that I'm a fan of both of the prior Morgan Freeman-starring Alex Cross films.  I enjoyed Kiss the Girls and find Along Came A Spider to be among my guiltiest pleasures.  But aside from inexplicably being PG-13 despite an inordinate amount of violence just in the trailer, the clip above feels like a direct-to-DVD franchise reboot more than a theatrical return, at times feeling like a parody of the genre.  Tyler Perry is fine as Cross, but he's of course no Morgan Freeman and the film clearly has to make an effort to convince you that he's a brilliant and sharp-witted detective, which was presumed with Freeman (and arguably would have been presumed with original lead Idris Elba).  Moreover, Perry's constant aggravation at Matthew Fox's raping and murdering is weird coming from someone who is supposed to be a longtime profiler.  Matthew Fox looks to be having a blast as the main baddie, and his cartoonish antics are in step with a literary series that basically plays out like a gore-drenched variation on a super hero comic book. While we see John C. McGinley right off the bat, Rachel Nichols, Jean Reno, and Gincarlo Esposito are apparently MIA so far.  Still, I can't help but wonder if Criminal Minds has completely filled the void for this kind of material, as that show is basically James Patterson meets Justice League.  Come what may, especially with the on-the-nose dialogue and somewhat C-level action beats, this basically feels like a bad extended two-part episode of Criminal Minds, or rather its awful spin-off Suspect Behavior from a couple years ago.  Oh well, Summit/Lionsgate will be releasing this one on October 19th.  As always, we'll see.

I, like you, have at least some affinity with the Freeman version of Cross. I've not been looking forward to this since the project began, the images released earlier this month did nothing to quell that feeling and the trailer all but confirms. Perhaps, if I'm searching for optimism, its not as bad as it could have been but ultimately this looks like a low-rent action vehicle for Perry, rather than reaches-high pulp for Freeman. I know which of those I'd prefer to sit through.

I was looking forward to it when Idris Elba was on board. But a Rob Cohen/Tyler Perry team-up? Absolutely not.