Weeds to conclude after eight seasons. And yet another three-act narrative closes shop one season early... 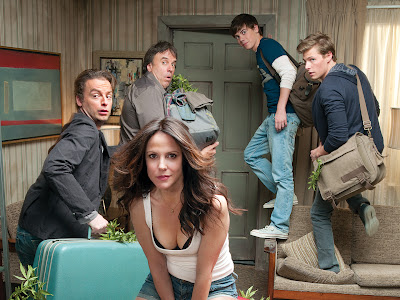 I like Weeds, having watched it first for work-related reasons and then having caught it on my own slowly over the last year or so via Netflix.  I'm not a die-hard fan, so news of its upcoming cancellation following the upcoming eighth season would otherwise be untroubling save for one key factor. Weeds, like any number of ongoing episodic series was clearly structured into a three-act structure, with three seasons for each act.  Like 24, Mad Men, and (so far) Sons of Anarchy among others, the show's long-form storytelling clearly established a set structure.  The first three seasons established the core premise (Nancy sells dope to neighbors in upscale Agrestic after her husband dies) and literally burns down the primary story, while the second three seasons upended Nancy's world and left her at what amounts to rock-bottom (her family abandoned her and she basically surrendered herself to police custody at the conclusion of season six).  That leaves three seasons to rebuild to some kind of third-act finale.  But just like 24, the logical narrative has been cut short by a season.


If you recall, the first three years of 24 established Jack Bauer as a somewhat extreme but generally in-control government agent who diligently protected America from various threats domestic and foreign (aside from some brutal violence in the season two premiere, Jack didn't do anything all that extreme during the first three seasons).  Seasons four-through-six were about Jack spiraling out of control turning into an enraged monster arguably almost as bad as the terrorists he hunted down.  Seasons seven and eight were supposed to be about Jack's slow return to normalcy, but that logical arc was cut short by the series' abrupt cancellation during season eight and Fox's plans to make a feature-film version of the show, leaving the eight-year arc incomplete for the sake of a cliffhanger to get people into theaters. The eight-season cliffhanger would have been perfectly appropriate had another concluding season been planned, but as it was it was an abrupt and unfair end to a classic episodic drama.  Mad Men and Sons of Anarchy have followed a similar route.  Three seasons followed by a status-quo shift and/or wrapping up of the major plot threads, with three more years to deal with the fall-out and/or get our characters to rock-bottom (is there any doubt that season six of Mad Men will be an exercise in misery?).

Say what you will about Lost, but it has a very polished three-act narrative structure, with two full-length seasons that deal with life on the island, two seasons that deal with trying to get off the island and deal with Ben and his minions, followed by two years of science-fiction heavy adventures that basically involve getting back to the island and resolving the core story.  Even Glee seems set on this course, having basically ended the story as we know it at the finale of season three and set the stage for a new mix of New York adventures and new 'New Directions' students replacing the old guard. Of course this isn't an iron-clad concept.  The X-Files did nine full seasons but struggled to maintain a satisfying third act after David Duchovney left at the conclusion of season 7.  Buffy the Vampire Slayer and Gilmore Girls basically had two full three-season acts with a single epilogue final season which brought everyone back from their season six-rock bottom point in a single year.  Angel and Alias were well on its way to their six-season/three-act narrative ala Lost before they were abruptly cancelled in season five.  The Sopranos and The Shield did the whole six-years/three-acts thing just fine.  And Smallville wrapped up its first act after three years but became hopelessly adrift after season six, with no real third act narrative in place while biding time for Clark to become Superman. But for a show like Weeds that so clearly establishes a three-act, three-seasons-per-act narrative, it seems almost silly to cut that final act short by a mere 13 episodes.  Maybe it's an arbitrary thing and if the last season is solid it arguably won't matter.  But the anal OCD critic in me clearly sees the shows structure and wants it to run for what should be a natural nine-season run.

What are your thoughts?  Do any of my readers actually watch Weeds?  Would 24 have been salvaged by an additional season to wrap up the arbitrary cliffhanger?  Please share below.
Posted by Scott Mendelson at 10:27 AM

Been watching Weeds since...well we had to watch it for work related purposes. I agree with your structure, but there's a lot of quality that starts disappearing once you start piling on episodes. I was about ready to quit after the horrid season 5. But luckily i didn't, because 6 was the best in the series since 2. But alas, it continued and season 7 may have been the worst season of the show's run. I'll watch season 8...but because I've been around so long and am eager to see the end.

I haven't seen season 7 yet, will catch it when it ends up on Netflix in a few months (or less?). Sad to hear it stinks, although that is another pattern in itself. The long-running show that finds its footing back in season six only to limp through two more mediocre seasons (Re - HOUSE).

I think I'm an oddity - big Mary Louis Parker Krush, since The West Wing, and loved the first two seasons mostly because of Kevin and the Krush, but I never found it compelling enough to come back after the break. I was also bitter they redid the opening song, but call me a traditionalist. I liked the song on Star Trek: Enterprise as well.