As Men In Black 3 crosses $400 million worldwide, some thoughts on preconceived box office notions and the wisdom of double-checking your conclusions. 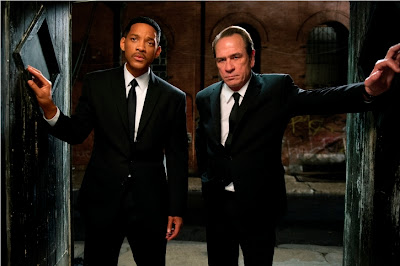 As of yesterday, Sony's Men In Black 3 has grossed $400 million worldwide after twelve days of theatrical release.  At this rate, $600-$700 million worldwide seems probable.  So even if the budget is $300 million, so large that the film may not be profitable even if it surpasses The Hunger Games's $645 million worldwide take, it is quite clear that Men In Black 3 is a pretty big worldwide box office hit.  It's arguably so big that only The Avengers (already well-ahead of course), The Dark Knight Rises, The Amazing Spider-Man (also a Sony film), and a trio of animated films (Madagascar 3, Ice Age 4, and Brave) stand even a theoretical chance of out-grossing it this summer.  Yet I come not to cheer-lead but to ponder.  At summer's end, will anyone bother to remark at how well the film did over its entire run?  Will the various pundits who wrote the film off as a flop or a disappointment after its 'mere' $200 million four-day global opening weekend over Memorial Day eventually check back at Box Office Mojo and realize the error of their original prognosis?  It's unlikely. The box office pundits of the world are often so dead-set in their preconceived presumptions, sometimes before a film even opens, that it's too much to admit that opening weekend isn't everything and that sometimes a would-be disappointment didn't disappoint in the end.

The constant drive to emphasize the negative, often in the face of opposing facts, is as much a force in entertainment journalism as it is in politics.  If Men In Black 3 is a global hit, you can't write critical essays exclaiming that Will Smith isn't a box office star anymore.  If you can ignore Cars 2 grossing $559 million worldwide, you can still write a damning take-down of Pixar as if their entire legacy is doomed.  It's easy to scream *flop!* when Sherlock Holmes: A Game of Shadows opened to just $40 million last December, but harder to check back and realize that the sequel actually out-grossed the original film by $19 million worldwide.  If you can ignore the fact that Mr. Popper's Penguins and Yes Man grossed $187 million and $223 million worldwide on respective $55 million budgets, you can hem and haw about how Jim Carrey has so obviously lost his box office luster.  If you could ignore the fact that Indiana Jones and the Crystal Skull vastly out-grossed Iron Man worldwide four summers ago ($786 million versus $585 million), you possibly found yourself writing the sexier narrative that upstart Tony Stark defeated the underwhelming Dr. Jones in a head-to-head box office match-up based on their near-tie at the US box office.

The examples are countless but the meme is the same: Ignore the sometimes complicated box office story in favor of simplistic interpretation, usually a negative one that allows you to write a negative hit piece on a star, filmmaker, or studio.  It takes work to realize that Jim Carrey has only had a single $400 million+ hit in his entire career (Bruce Almighty) and that his latest star vehicles are, by virtue of back-end deals, now cheaper than most Adam Sandler films.  It takes time to explain that while Men In Black 3 cost way too much to make, it's a big hit in terms of realistic expectations and its performance is proof of Will Smith's continued global drawing power.  It takes energy to double-check box office figures, to compare them to relevant precedents, and draw often nuanced conclusions in regards to how well a given film has performed at the domestic and worldwide box office.  But if you deal in box office minutia, you damn-well owe it to your readers to actually do the homework and check your work before drawing a broad conclusion that the facts might not justify.

Nikki Finke resembles this article...that is all.

Finke does this but she's hardly alone in doing so. Its the rule to make the most hyperbolic headline possible to draw in the readers, usually in the negative sense.

Even just on the domestic front, when Snow White opened to just $2m more than MIB3 did the week before, it was crowned a glorious success while MIB3 was deemed a failure. And now that Snow White is six days old, it's total stands at $71m while MIB3's total after six days was $83m. A full $12m more, of course helped by Memorial Monday.

Can Snow White make up that difference? It's still too early to tell, but the rush to drive nails into a coffin is turning box office commentary into an Undertakers BBQ, and objectivity has flown completely out the window.

Snow White and the Huntsman is having a somewhat slow (IE - traditional) international roll-out, meaning it will be awhile before we know how well it does overall. Still, with $100 million worldwide as of Tuesday, I wouldn't bet against it quite yet.

If you could ignore the fact that Indiana Jones and the Crystal Skull vastly out-grossed Iron Man worldwide four summers ago ($786 million versus $585 million),

Interesting that in contrast to Tarzan, Dick Tracy, John Carter, the Lone Ranger, Flash Gordon, Buck Rogers, Sherlock Holmes, Natty Bumppo (Last of the Mohicans), Conan or Zorro, Indiana Jones does not actually predate Batman (debuted in 1939) or Iron Man (debuted in 1963), since Indiana Jones debuted in the film in 1981, not in comic strips, the pulps, other prose or radio.

Not betting against it, and my comment was only about the domestic race thus far, which MIB3 is ahead of after six days of release. Boy did that memorial Monday make a difference. This weekend will be a telling one for both these films, with MIB3 taking a more direct attack with males with Prometheus, so we'll see how that goes.
If I were in the predicting business, I am still giving MIB3 an eventual narrow domestic victory over SWATH, probably less than $5m, as SWATH will also face some direct competition next week in Rock of Ages which should bring out the female audience.
Either way, I think both films end up somewhere between $160m-$180m unless SWATH has a fantastic hold this weekend.

Nikki Finke could learn from reading this. I'm so tired of her screaming DISAPPOINTMENT!, DISASTER!, etc. after a big movie doesn't gross $150 million its opening weekend. For all her influence, it's pretty sad the only time she's impressed is when records are broken. If TDKR doesn't beat Avengers' $207 million weekend (which it likely won't without 3D surcharges), is she really gonna have the balls to say it somehow disappointed?