Guest Essay: Merrill Barr explains why Comic-Con is a better marketing tool for television than it is for movies. 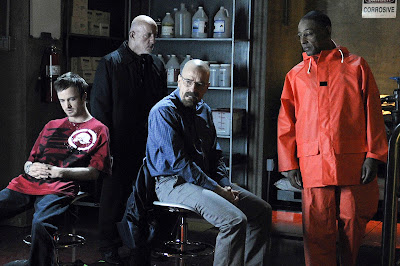 From time to time, Mendelson's Memos is able to present reviews and/or essays from guest writers, as is the case this afternoon. Merrill Barr is a frequent analyzer and reviewer of television for both blogs and podcasts. A former contributor to FilmSchoolRejects.com, he currently runs the television podcasts The Idiot Boxers and Operation: Nikita for FatGuysAtTheMovies.com and occasionally provides written reviews for DarkMediaOnline.com. He can be found on twitter (@sonic43), Facebook (facebook.com/merrilljbarr) and Tumblr (TheIdiotsBox.com). He can also be contacted via email at TheIdiotBoxers@gmail.com. Please enjoy, share, and comment.

Four years ago, when it came to movie hype, there was no greater combination of studio marketing and rabid fandom than Comic-Con. Iron Man, The Dark Knight, Green Lantern, Twilight, Captain America, Piranha 3D, Avatar, Scott Pilgrim, Cowboys & Aliens, The Avengers, if your movie had even a sliver of nerdy potential (and sometimes not at all [Salt]) you went to the annual San Diego Comic Book Convention, better known as just 'Comic-Con'.  But that mentality is shifting in movie land.  The downside to a massive marketing push like Comic-Con is – and let’s not beat around the bush, that it is all marketing. Really cool, sometimes clever and intelligent marketing, but marketing none the less – is that there needs to be results. The problem is that it’s hard to differentiate the impact of Comic-Con vs. every other piece of marketing inside the box office because of one thing… Time.

Timing is everything. Every film’s marketing campaign is a strategic practice in the art of timing. This TV spot, or this trailer, or this poster, or this interview, or this review at this time is what research and past experience says will yield the greatest result. The problem with Comic-Con is that it takes that system and throws it out the window. Often times, films being promoted at the convention are due to be released as far as a year out. And therein lay the dilemma studios face.  Is the money worth it?  We aren't just talking about the cost of a few plane tickets and hotel rooms for the cast, director and writer. Sometimes we’re talking upwards of hundreds of thousands if not millions of dollars to rent out theaters for exclusive screenings, bands to perform live shows, workers to build fully functional and walk-able attractions.


The only way to make that money back is in the box office. But it became clear after films like Cowboys & Aliens, Scott Pilgrim vs. the World and Tron Legacy either bombed or disappointed in ticket sales that the expenditure wasn’t worth it for a property no one has heard of outside the con. And if they have heard of the property, then there is no need to spread the word at Comic-Con.  If you’re attending the convention, you already know that Whedon is directing The Avengers, Bane is the villain in the next Batman film and Peter Jackson filmed The Hobbit at 48fps. You don’t need the studio expenditure of the con to inform you of that, especially when you have to wait upwards of a year to see the final result.  But that game changes with television.

When shows like Teen Wolf, Psych, Burn Notice, The Legend of Korra, Warehouse 13, Sons of Anarchy and Nikita go to Comic-Con, the studios don’t have to wait months to see the result of their expense. They wait days, weeks at the most for the Nielsen ratings to come in. And if past season are already on services like Netflix, Hulu, Amazon and iTunes, the bump in streaming numbers is either going to be there or it won’t.  For television, the expense of Comic-Con makes sense because fans can either see the final product of past episodes right then and there or they only have to wait a few weeks (two months tops) for the show to premiere.  Last year, while Disney was busy pulling The Avengers out of Comic-Con, the television networks held over one hundred panels for various shows across all demographics. And the result of that labor was clear and decisive.

Television going to Comic-Con makes sense because television is a medium built on immediacy. It’s a medium built on social conversation before, DURING and after the program airs. Film, while some may view as the superior medium, is slow. Comic-Con is anything but.  While no one is saying that some cool stuff isn’t shown for movies at Comic-Con, it’s become clear the expense is not worth the result. But television, thanks to the digital age and a generational need for “I want it now,” can take advantage of the benefits the convention offers. It’s just a matter of timing.

Merrill Barr
Posted by Scott Mendelson at 11:40 AM