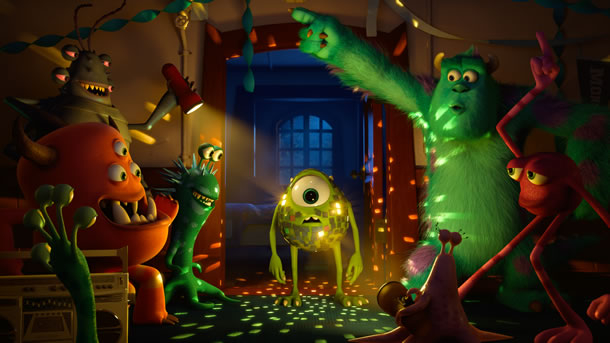 Officially it's because Billy Crystal gave them enough improv material to cut four teasers, and I suppose there is some charm in walking into Brave on Friday not knowing which teaser you're going to get.  "Billy Crystal's an amazing comedic actor," remarked Dan Scanlon, Director, Disney•Pixar's Monsters University. "He gave us so much fun material, we decided to cut four slightly different versions of the trailer. We are so happy to have him back as Mike!". Allison hasn't been keen on watching Monsters Inc., due to the whole 'monsters = scary' meme.  But perhaps seeing this comedic teaser might change her mind.  The differences below are limited to one single line of dialogue, but I suppose that means the trailer can be released to Yahoo, Disney, Huffington Post, and iTunes all at the same time as 'exclusive'.  Anyway, say what you will about the depressing fact that Pixar is following up the disliked Cars 2 and the critically-mixed Brave with a needless prequel, but the idea of Pixar doing a college comedy has some token merit.  Anyway, Monsters University opens on June 21st, 2013.  As always, we'll see.  The trailers are after the jump.

Posted by Scott Mendelson at 7:13 AM