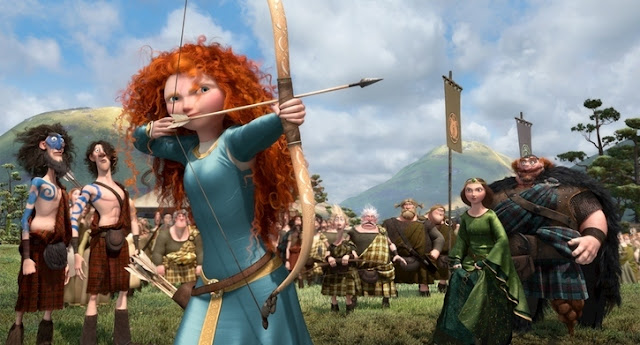 Another year, another $60-$70 million Pixar opening weekend.  Brave (review) is their thirteenth release, as well as their thirteenth number-one debut and their eighth film to open between $60 and $70 million since 2001.  Brave, which attracted headlines due to the fact that it was Pixar's first film with a female lead (and a female director until Brenda Chapman was replaced by Mark Andrews), opened with an estimated $66.7 million this weekend, putting it (for now) just above Cars 2's $66.1 million debut and a bit below Up's $68.1 million opening as the fifth-best debut in Pixar history.  Brave pulled in $24.5 million on Friday, which gives the film a 2.71x weekend multiplier, which is actually pretty low by Pixar standards.  Still, it's close enough to the 2.73x multiplier for Wall-E ($23m/$63m), the 2.68x weekend multiplier for Toy Story 3 ($41m/$110m), and the 2.64x weekend multiplier for Cars 2 ($25m/$66m) to avoid any alarm.  Movies, even most animated ones, are just a bit more front-loaded these days and Pixar films tend to play like sequels in a popular franchise than stand-alone entries. In terms of total box office, there is always the chance that Brave could play like Cars 2, which (comparatively) flamed out with just 2.8x weekend-to-total multiplier ($191 million domestic) and end up below $200 million.


But the more likely domestic end-point is somewhere between Wall-E ($223 million domestic) and The Incredibles ($261 million).  International is more of an open question (it earned $13.5 million overseas in ten territories, or 17% of its worldwide market). But again I'm guessing between Wall-E ($521 million) and The Incredibles ($631 million).  Of course, I didn't care for the film so I hesitate to presume that it will become a phenomenon at this point (it got an A from Cinemascore, for what that's worth), although I was surprised how well Up ($291m/$731m) held up due to how bloody depressing it was.  Still, Up (my favorite film of 2009, emotional gut-punches and all) became a generational film, something kids see with their grandparents just as Finding Nemo ($339m/$867m) become a defining father/son generational film.  If Brave can be 'that film' for mothers and daughters, then the sky is the limit.  My distaste for the film (which soft-pedals the idea of forced marriage so that its female lead can be slightly humbled) aside, it's been quite encouraging this year with one female-centric smash hit after another.  I'd argue that girls deserve a better film than Brave, but it's a start.

The second major opener was Fox's $70 million genre-mash-up, Abraham Lincoln: Vampire Hunter.  It's $16.5 million debut isn't great, but it could have been a lot worse (see - Jonah Hex) and Fox's unparalleled foreign box office prowess means that this film could easily top out with $40 million in the US and still gross another $100 million overseas.  And since Fox only spent $70 million on the film, it doesn't have to do mega-blockbuster numbers worldwide to break even and/or make a profit (what a novel concept...).  I'm of two minds about the film (which I have not yet seen and might not for awhile).  On one hand, it's seven year old boys playing a game of 'wouldn't it be cool if...' concept is a distressing sign of the kind of thing that can get green-lit as a major motion picture, even if the original novel apparently had intelligence and political subtext that the movie omitted.  On the other hand, it's a mid-budget R-rated action thriller filled with decent character actors that is arguably at least somewhat different than the mold.  I'm heartened by the fact that Fox didn't spend $250 million, cut it to a PG-13, and then act 'shocked' when the film didn't become the next Inception.  Still the weak opening means that we won't see a continuing series of "INSERT PRESIDENT: RANDOM MONSTER SLAYER" films. Whether that's good news or bad news is up to you. The last wide release was Seeking Friends For the End of the World, which Focus Features dumped into 1,625 theaters with minimal advance push and thus predictable results.  The Steve Carell/Keira Knightly apocalyptic rom-com cost just $10 million, so its $3.8 million debut is more a moral defeat than an actual one.  I could whine that Focus Features went pretty half-hearted on this one, but on the other hand it is precisely the sort of picture that I always whine about dying in the art-house when it is actually a relatively mainstream attraction.  The film will still probably equal its budget domestically and with halfway decent overseas numbers it will eventually break even and/or make a profit.  Still, between this and their inexplicable refusal to truly expanded the utterly charming and completely accessible The Moonrise Kingdom (it's on just 395 screens in its fifth weekend), I hope Fox Searchlight is kinder to the fantastic Beasts of the Southern Wild, which opens on Wednesday in limited release.  Woody Allen's From Rome With Love earned a scorching, if expected, $75,874 per each of its five screens.  I'll presume Sony Classics will be expanding that one over the July 4th weekend.

There's not too much holdover news.  Despite direct competition, Madagascar 3 pulled in another $20 million and has now grossed around $157 million.  It's already surpassed Megamind ($148 million), Puss In Boots ($149 million), and Over the Hedge ($155 million).  It'll pass A Shark Tale ($160 million) and Kung Fu Panda 2 ($165 million) within the next full week. $180 million-$200 million looks to be where it finishes. Worldwide, it's at $365 million.  The Avengers dropped just 21% ended the weekend with $598 million, so the $600 million barrier will be crossed within the week.  Prometheus added another $10 million for a $108 million domestic total and $261 million worldwide.  Snow White and the Huntsman earned another $8 million this weekend for a $137 million domestic total and $297 million global cume.  Again, with a more reasonable budget, this would qualify as a big hit.  The Moonrise Kingdom, by the way, crossed $10 million this weekend, but I'd argue a true expansion at its peak (a couple weeks ago) could have seen this film challenging the $24 million gross of The Life Aquatic with Steve Zissou if not the $52 million gross of The Royal Tennenbaums.  As of now, it will merely struggle to earn back its $16 million budget.  Men In Black 3 sits with $163 million, right in the middle of Will Smith's normal $140-$180 million comfort zone (worldwide it's at $577 million).  Last weekend's two flops, That's My Boy and Rock of Ages, have around $26 million and $28 million respectively.

That's it for this weekend. Join us next weekend when four wide releases open.  Ted (review Tuesday), People Like Us, Madea's Witness Protection, and Magic Mike all square off for mutually-assured destruction.

I know that the 60m-70m is the Pixar sweet spot, but you have to wonder whether the surprising strength of Madagascar prevented Brave from doing a bit more than $70m. Kind of a fetish with me but I find out extremely ironic that as far as animated movies go, you either do $70m or under, or $100m and over. There isn't a single 3d animated movie that has opened between $71m and $100m. If Brave was first out of the gate, or at least had a bit more breathing room, maybe it might have crossed what now seems to be a very elusive barrier.

Also, regarding the so called negative blow back from Cars 2, to me that is only among critics. I don't know any kid who didn't like Cars 2 and afterwards swore off Pixar movies forever.

Fascinating. I never realized that, but now I feel even dumber for predicting Madagascar 3 to open with $85 million several weeks ago...

Doing some daily tracking of Madagascar 3 and it is now running just ahead of Lorax at the same point, $160m to $159m after 18 days. Lorax is at $212m thus far, and Mad 3 has kids out of school to help boost weekday numbers. Are we looking at a $215m tally for Mad 3? It definitely reverses the trend of downward domestic grosses for sequels that took place last year.