Unequal equivalency: Why 'girls can do anything boys can do' sends a harmful, not positive, message to girls and women. 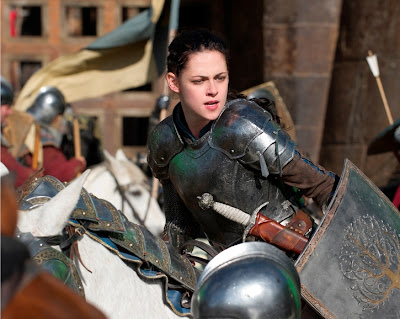 "Why is this okay?"  It was a random thought that I had while watching the final twenty minutes of Snow White and the Huntsman.  I suppose I should put a spoiler warning, but if you've seen even a single commercial or trailer you know that during the third act Snow White dons a suit of armor and rides into battle on horseback.  It's not that I took any offense at the notion, but I sat in the theater last night wondering why this kind of revisionism was completely acceptable for Snow White but not for James Bond.  Simply put, if someone tried to make an 'Elseworlds' version of James Bond where he was a British (or American?) spy during the 1880s and engaged in action-fueled espionage in a wild-west setting, I'd imagine the film punditry world would be in a tizzy.  And let's not even try to imagine what would happen if someone tried to make a Superman movie where Krypton didn't explode, Lex Luthor was a CIA agent who was actually an alien, and Superman wore a spacesuit from which he received most of his powers, because J.J. Abrams wrote wrote just such a script that sent the Internet into pandemonium back in 2003.  The geek community (and arguably the mainstream media outlets in a desperate attempt to be 'down' with the geeks) explodes with outrage at any alleged deviation from their beloved source material.  Spider-Man has organic web shooters... horror!  The Teenage Mutant Ninja Turtles might actually be from outer-space in their next movie... shock!  James Bond drinks a beer Skyfall... gasp!  But Alice (in Wonderland) dons armor and kills a dragon and no one cares.  Snow White dons armor and rides on horseback into a medieval battle scenario and no one cares.


Yes comic book and recent literary properties are often more sacrosanct to the fanbase compared to fairy tales and myths passed down from centuries ago, but I'm asking a two-pronged question here.  First of all, is there a reason that conventional wisdom demands that comic and literary properties based on boy-centric stories must be slavishly faithful while stereo-typically female-centric properties can be changed at whim to suit a more action-hungry (read- stereo-typically boy) dynamic?  Even Twilight almost went that route, as the original film version constructed over at Paramount basically turned Edward Cullen into a Blade-type vampire killer before they put the project in turnaround and Summit Entertainment snapped up the rights and made a more faithful adaptation.  We'd never think of altering Wolverine in a fundamental fashion, but Halle Berry is allowed/encouraged to screw up Catwoman however she sees fit.  Moreover, both the concept of these changes and the end-result points to something more insidious.  Snow White dons a suit of armor and charges into battle, and it's supposed to be read as 'progressive' or 'empowering'.  Yet would we be just as impressed if James Bond put down his PPK and tried to 'talk it out' with his enemies?

The meme is the same: Female characters engaging in stereo-typically male activities (playing sports, killing people, etc) is seen as culturally progressive and/or 'empowering'.  Yet male characters engaging in stereo-typically female activities is not only not 'empowering' but often viewed in a mocking light (see the Dudes Club in What To Expect When You're Expecting and/or any number of television episodes where the male hero finds a baby and has to raise it for 44 whole minutes). It should be noted that (spoiler...) Snow White and the Huntsman ends without having Snow White choose either of the two would-be love interests that are presented to her.  Yet while it is a refreshing turn of events, it is implicitly saying that she is only a progressive woman because she killed and conquered and didn't get a guy in the end.  It is not only that she engaged in 'guy behavior' but that she renounced 'female behavior' that makes her a strong female character in the eyes of the film, and perhaps certain segments of society as well.

At the heart of this concept, and the reason why Pixar's Brave (judging by its marketing) isn't nearly as feminist as it might want to be, is the false dichotomy behind the cliched 'girls can do anything boys can do too' meme.  It sells the idea that male activities are inherently superior to female activities.  We all cheer when Katniss Everdeen kills people but boo when Bella Swan aggressively pursues a guy.  We scream 'empowered!' when Lisbeth Salander uses violence to save the proverbial day yet think less of her when she changes her appearance and uses her more conventional attractiveness to entrap a villain.  And since there is no opposite concept in play, no societal pressures for boys to engage in 'female behavior', the message is that male behavior is inherently superior.  We live in a society where having Snow White don a suit of armor is progressive, but Superman donning a dress is unfathomable.  What message is that really sending?

Wonderful analysis. It's all tied into the binary machine; two genders: male: superior, female: inferior. I always thought the original fairy tale was a parable for the dangers of patriarchy. The concept of beauty overriding any other pursuits for women was a catalyst for them to just despise and hate other women and keep them away from male matters whatever they may be. Scott you should be a gender studies teacher.

I'm not sure how much of the Spiderman web shooter/Bond drinking a beer thing is actually sexism or just fanboy culture/geekdom, which I actually consider one of the more annoying, creativity-killing things in the culture at the moment.

I think what's being overlooked here is that since the history of mankind is essentially patriarchal, it is those stereotypically "male" traits that make easy shorthand empowerment, whether it really is or isn't. I'd agree with your assertion that the message sent is that "boys activities are inherently better," though I'd argue this is at least as, if not more than, damaging to boys who don't fit the "normal" masculine mold than it is for any girl. And so, while the masculine side of spectrum is certainly more revered, there's an encouragement for girls to occupy both sides of that, where boys are pressured much more to stay of their side, and are mocked or worse when they don't.

This is interesting, & I see your point. I wish there's a day when female & male activities are seen at the same level, but sadly they're not. I grew up with a TV show like Xena though, I loved that she could beat almost any guy in a fight with absolute ease but would used feminine ways to mislead people too. May not be inherently good, but hey, that's the kind of girl I secretly aspire to be, I guess. ;)

Interesting editorial, Scott but I'll respond with this; women who want to serve in the military-is that considered guy behavior if they truly want to serve for their country and fight in combat?

In theory, I agree with your editorial, even if I liked/loved Snow White & the Huntsman a lot more than you did.

In the film's defense, it's not like Snow White charged the castle and cut down everyone in her path. As stated in the film, she became the rebellion's symbol/weapon. At the end of the day, she took down two combatants. The previews for the film had you to believe that she became a hardass warrior and was not to be messed with in the climax of the film.

But, that was hardly the case. In retrospective, all she was was Queen Elizabeth for Elizabeth the Golden Age.

Not sure that comparing comics to fairy tales makes the point as effectively, though. Fairy tales are absolutely femalecentric stories, but they have been messed with and changed around for so many centuries now. The Disney (and before that, pantomime) version of these stories has been rendering the heroines more and more passive and "traditionally" feminine for so long that frankly, most of them are due for a good kick of subversion, whether that involves putting the heroine in armour, or messing with the formula in some other way.

Red Riding Hood, for instance, wasn't always rescued by the huntsman. Sometimes she was rescued by her mother, or got to do the rescuing herself.

I'd like to see movies that allow for the definition of 'strong female characters' to be more flexible than 'female character who kicks butt while looking sexy' but I don't think Snow White in armour on a horse is as much of a problem as you think. The fact that she's wearing full armour on said horse, without showing off her midriff, feels like a pretty amazing win to me.

As usual, great essay Scott! This, paired with your thoughts on Rachel Wesiz in the Bourne trailer, are another couple great examples of incisive thought on gender in the mainstream movie business.

You are correct, and I don't entirely fault the film for the issues above, as I merely used it as a spring board for something that's been on my mind for awhile. Whatever my issues with the film, this is a separate thing that I can't hold against it, since I'd argue its institutional. As for your opening sentence, that's indeed a valid point. Of course in terms of how its perceived, doing combat and slaying foes has long been a 'male-dominated' behavior. One could argue that the said generalization should change, and I would agree with that, but just look no further than GI Jane. Said Ridley Scott film climaxes when Demi Moore rebuts her commanding officer with the gender-specific insult "suck my balls" (or something to that effect). She has 'passed the test' by figuratively becoming 'one of the guys'. Food for thought on my end though...

Nah, I wouldn't say it was inherently bad. I would say that the qualities of Xena, Buffy, She-Ra, etc other than their ability to fight/kill things makes them feminist more-so than their skills in battle.