Can't wait until June 22nd, eh? Via books and toys, Disney/Pixar's Brave spoils itself a month before release. 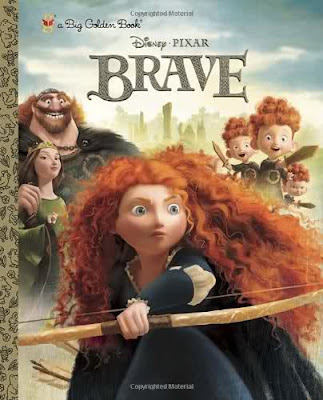 The first round of press screenings for Pixar's Brave start tomorrow night.  I won't be in attendance, and I probably won't be attending any press screenings.  It is a cruel irony that my daughter is now old enough to go to press screenings with me and actually wants to go to press screenings with me, yet 90% of what I would take her to is now shown in 3D for media audiences.  In short, the few times we watched a 3D movie, she took the glasses off 15-minutes in and watched the rest of the film in blurry-vision.  Since she wants to see Brave, it just makes sense for me to wait for a Friday June 22nd late-afternoon 2D matinee.  Alas, the whole 3D hassle also prevents me from taking her to whatever cool stuff the El Capitan is doing this time around, but I digress.  On the plus side, if I just can't wait until June 22nd, I can just read the movie right now.  Wait, what?


Yup.  Despite a marketing campaign where 90% of the footage was from the first act, where they barely hinted at where the story would go past the 30-minute mark, Disney still saw fit to spoil the entire movie via its tie-in merchandise.  Since May 15th (I checked on Amazon), the entire story for Pixar's Brave has been available to read via its various novelizations for anyone willing to plunk down the cash and/or spend ten minutes in a bookstore.  And that's not all.  The various toy tie-ins are available to purchase too, and sure enough, some of them are out-and-out spoiler-filled (don't click if you don't want to know).  Even some of the book covers constitute major second-act reveals, which means anyone randomly walking through Target or the like now has to avert their eyes in the book section and/or the toy section, lest they be spoiled like I was during a recent shopping trip.  At the end of the day I can choose to read the story now or wait until June 22nd.  But when a film company works so hard to keep details secret from paying audiences, it seems the definition of counter-productive to release what amounts to the entire film in book and toy-form well prior to the film's release.  It just kinda seems stupid...