Why Warner Bros' Lego: The Piece of Resistance may end up being the greatest movie ever made by humans... 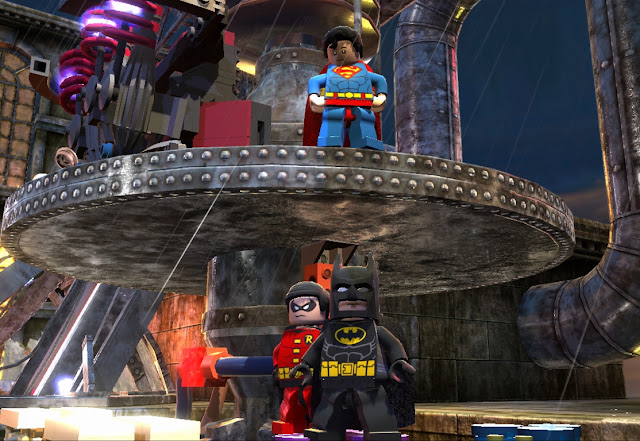 Much of this is speculation, so bare with me.  Jeff Snyder over at Variety reported today that Channing Tatum and Will Arnett have been cast as voices in Warner Bros' new Lego movie. The bad news is that yes there is a Lego movie coming, but the good news is that it's being directed by Phil Lord and Christopher Miller, they of Cloudy With A Chance of Meatballs and 21 Jump Street (so they are two for two so far).  The even better and more curious news is that the live-action/animation hybrid Lego: The Piece of Resistance is casting Tatum as Superman and Arnett as Batman.  Yup, Justice League may or may not ever happen and Wolfgang Peterson's Superman Vs. Batman project is a distant memory, but we will indeed be seeing an big-screen team-up of the Caped Crusader and the Man of Steel in some form.  That's certainly amusing and perhaps noteworthy, but a little imagination leads to an even more insane possibility.  In short, what if Warner Bros. gets the rights to use all or most of the various properties that Lego currently has?

Might we see the entire DC superheros line onscreen as well, completely pulling out the rug from the would-be Justice League?  But wait, there is more!  While the chances of Disney/Marvel allowing this Warner Bros. film to use the Marvel heroes characters are pretty slim, it's not beyond the realm of possibility that Harry Potter and his character library might show up in this WB-financed production.  And what about Star Wars?  Indiana Jones?  The Lord of the Rings, which is also in Warner Bros' control at the moment?  Obviously this is all random nerdy speculation, but we could theoretically see a situation where the Lego movie becomes some kind of modern-day feature-length variation on that 1980s anti-drug special Cartoon All-Stars to the Rescue.  But this time, instead of Harry Potter teaming up with Gandalf and Darth Vader to warn kids about the dangers of snorting cocaine, they will merely appear alongside Green Lantern and Indiana Jones to kick unholy computer-animated ass onscreen.  And of course, if for some nutty reason Marvel actually lets this Warner Bros. production use their Lego characters, we'll see Wolverine and Spider-Man fighting not just in the same movie (which I'm guessing is going to be the big 'get' for The Avengers 2), but in the same movie alongside Batman and Superman.  We'll see if any other Lego franchises can be brought into the fray, but I'd bet even money on at least the WB franchises showing up to play.

What do you think?  Is there a shot in hell of any of these mega-team ups actually happening, or is it just a pipe dream?

That some of those characters from other properties may end up getting incorporated is certainly plausible, but I won't scream to the heavens if it doesn't happen. I sincerely hope that at the very least there will be the addition of Wonder Woman or Supergirl on the heroes side, and the inclusion of Lex Luthor and/or Darkseid on the villains side.