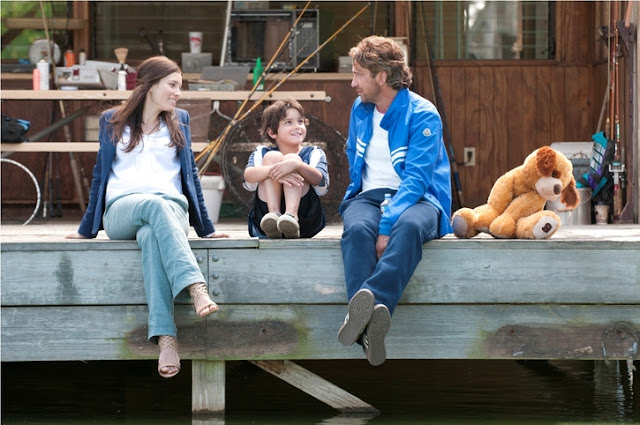 The decision by Warner Bros. to move The Gangster Squad (trailer) to January, 2013 and Universal's choice to move Les Miserables from next weekend to Christmas day should have caused a giant game of musical chairs.  It didn't, and now we have the second December weekend in a row (with one more to come) with just a single new release).  Meanwhile the last two weekends of the year are going to be jam-packed with major films (Jack Reacher, This Is Forty, DJango Unchained, The Guilt Trip, etc.), all of which could have *easily* topped the box office and/or dominated the competition had they opened this weekend or last weekend.  But weekends that are barren of new releases save for a Gerald Butler vehicle tend to be very boring box office weekends indeed.
But this weekend saw but a single half-hearted new release, a Gerald Butler rom-com that once again proves that Butler is only a movie star when he has a bigger co-star beside him.  And while Jessica Biel may be a better actress than the mainstream material she gets offered would attest, she ain't Katherine Heigl or Jennifer Anniston (or Jamie Foxx for that matter).  Play For Keeps debuted with $6 million this weekend.  The film earned a B+ from Cinemascore while playing 57% female and 74% over 25 years old.  Forgive me if no one cares, save to feel bad for the careers of Uma Thurman, Catherine Zeta-Jones, and Judy Greer as they are forced to play desperate soccer moms who just can't resist Mr. Butler.  300 was a long time ago, and it's tough to be a movie star when your break-out role renders you unrecognizable.  He'll continue to work because the industry still thinks the man who killed Joel Schumacher's Phantom of the Opera (he can't sing, he really can't sing) is a next wave movie star.  But I think it's time to call time-of-death on Butler's alleged movie stardom.

It's pretty much all holdover news from here on out.  Skyfall topped the box office in its fifth weekend, which is unusual but more of a sign of the weak releases over the last two weekends and the fact that it just has better legs than the traditionally quick-kill Twilight Saga.  Had Jack Reacher or This Is Forty opened this weekend, they'd be number one, simple as that.  More important than rank is staying power, as the 007 adventure earned another $11 million and raised its domestic cume to $261 million.  It's $8 million away from out-grossing its closest competition by over $100 million.  Worldwide, it's at $919 million and thus over $300 million ahead of any previous 007 picture.  $1 billion seems pretty certain and at least $950 million seems a lock, which puts James Bond squarely back in the realm of top-tier franchises. It's also now Sony's biggest global hit ever, besting the $890 million gross of Spider-Man 3.  Meanwhile, Twilight: Breaking Dawn part 2 earned $9.2 million (-47%) this weekend.  It has surpassed the $712 million gross of Breaking Dawn part 1 to become the biggest worldwide grosser in the series, with $751 million and climbing.  Domestically, it's at $268 million, it's now tracking ahead of New Moon and just behind Eclipse, which had a two-day head start if you recall.  Point being, $300 million is still a possibility.

Lincoln will benefit from the choice to move Zero Dark Thirty (review) into January for wide release, as it's now the only true Oscar game in town (Argo is basically done, and Weinsteins stupidly didn't go wide with Silver Linings Playbook over the last two weekends, with another $2.2 million this weekend on just 371 screens) other than Django Unchained in two weeks.  Lincoln will pass $100 million over the next week, which was arguably unthinkable before its release.  Hyde Park on the Hudson debuted with $20,000 per-screen on four screens, which means little for a poorly-reviewed film that won't get the Oscar traction it was expecting.  Hitchcock is slowly expanding, earning another $725,000 on 187 screens. The lone new release last weekend, Killing Them Softly, dropped 60% in weekend two for a $2.7 million frame and a $11 million cume.  Alas...

Rise of the Guardians actually held somewhat strong this weekend, earning $10 million in weekend three.  But a relative bomb is a relative bomb ($61 million cume), as the DWA film won't break $85 million in the states.  Of course, it could still do $300 million overseas, but we'll see when we know (it's at $150 million worldwide thus far).  Also struggling with high production costs is The Life of Pi.  It's also at $60 million and also at around $115 million worldwide prior to this weekend.  The $120 million film is arguably doing better than expected but Fox will still have to hope on their overseas magic to break even.  In terms of Oscars, it's tough to see Fox spending oodles of money on a red-ink picture in order to snag nominations for awards that it surely won't win.  Elsewhere, Wreck It Ralph now has $164 million (it's over $200 million worldwide) and Flight has $86 million, meaning it will get to at least $90 million.  Red Dawn is at $37 million, which is frankly better than I thought it would do, for what that's worth.

That's it for this weekend.  Next weekend sees the seemingly heavily-anticipated debut of The Hobbit: An Unexpected Journey, available in 2D, 3D, IMAX 3D, 48 fps 3D, and 48fps IMAX 3D.  Until then, take care.

If this "film" earned a B+ from CinemaScore, and Killing Them Softly got an F, it can only mean that CinemanScore is as meaningless as Gerard Butler's leading-man career...

CinemaScore is essentially the People's Choice Awards for movie grades.