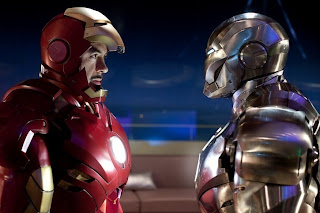 Iron Man 2 has grossed $128.1 million for the Fri-Sun period. That gives the sequel a relatively reasonable 2.5x weekend multiplier. It is currently the fifth-largest opening weekend on record, behind Pirates of the Caribbean: Dead Man's Chest ($135m), Twilight Saga: New Moon ($142m), Spider-Man 3 ($151m), and The Dark Knight ($158m). The film scored $10.2 million in IMAX theaters alone, breaking a record for a 2D IMAX debut (Star Trek's opening weekend grossed $8.2 million in IMAX over the same weekend last year). The gender split was 60% male and 40% female. The age demos were 60% over 25 and 40% under 25. As mentioned yesterday, the film scored an 'A' from Cinema Score audience polling.

The film pulled in $57 million in international grosses this weekend, giving the film a $194 million worldwide weekend. Coupled with the film's international roll-out last weekend (it was released April 30th in many overseas markets to steer clear of World Cup fever), the Paramount sequel has amassed $322 million worldwide so far. As mentioned yesterday, there will invariably be some talk that the film's US opening weekend was somehow disappointing because it didn't break the opening weekend record ("Boo-hoo, it should have been in 3D smell-o-vision!"). It pulled in $128 million in the first three days. It is the biggest opening weekend in Paramount history and Marvel Comics' biggest launch yet. Iron Man 2 grossed $51.2 million on Friday (the eighth-biggest single day ever), $45.7 million on Saturday, and $31.1 million on Sunday. It had the fifth-biggest Friday, the fourth-biggest Saturday, and the twelve-biggest Sunday.

While no records fell, this was a clear-cut case of a sequel building on the goodwill earned by the first installment. The film's opening weekend take was a good 26% up from the $102.1 million earned in the first 3.5 days (with Thursday showings) of Iron Man. That puts it on in the same growth area as the National Treasure pictures (27% up). Needless to say, when the first film grossed $100 million in its opening sprint, there is only so much room to expand. Besides, the marketing materials pretty much depended on audiences' love for the initial chapter, as the trailers and commercials didn't offer much different his time around. The only new aspects was a bare-chested Mickey Rourke wielding laser-whips and Scarlett Johansson kicking people while dressed in a very tight black-leather outfit. So considering that the sequel basically promised 'more of the same', this is a terrific debut. Whatever my issues with the film's quality, opening weekend is about marketing and not quality.

Long-term prospects are decidedly uncertain. I'm a little puzzled by the Cinema Score results, as frankly no one I've talked to was particularly fond of the film (and there are no moments worth relishing over and over again). Obviously next weekend will tell the tale, as Ridley Scott's Robin Hood and the Amanda Seyfried vehicle Letters to Juliet will provide a token amount of demo competition. The original picture grossed 3.11x its opening weekend by the time it finished with $318 million. That's pretty solid legs in this day and age, but no one should expect such steadiness from a heavily-hyped sequel. But even the much-loathed Spider-Man 3 scored a 2.23x multiplier, turning a (then-record) $151 million opening weekend into a $336 million total (such a fate would put Iron Man 2 right at $286 million). A 2.5x weekend-to-total multiplier would net the film a rock-solid $320 million, and that seems to be a reasonable expectation at this point. Come what may, Paramount will do whatever it can to surpass the $330 million (and counting) earned by Disney's Alice in Wonderland (congrats to Tim Burton and co, as his picture just surpassed The Lion King as Disney's third-highest domestic performer ever). Bragging rights are of (sorry) paramount importance in situations like this. Matching Alice's $960 million in worldwide receipts is a trickier gambit, as the original Iron Man earned only $266 million overseas. As always, we'll see...

Last weekend's top picture, A Nightmare On Elm Street, slid to number two this weekend. Good news, right? Oh... wait, it plunged a whopping 72% in its second weekend, grossing $9.1 million and ending day ten with $48 million. As expected, the horror remake crumbled due to heavyweight demo competition and the fact that absolutely no one likes it. The drop was the 35th-biggest second weekend plunge in history, the seventh-largest such drop for any film playing on over 2,000 screens, and the third-largest for any film opening on 3,000 screens or more (behind Doom and Friday the 13th). Still, by default, the film is already the highest-grossing pure Freddy Krueger picture, but it won't touch the $87 million amassed by Freddy Vs. Jason. So, regardless, the $35 million-film will be quite profitable. In better news for better movies, How to Train Your Dragon crossed the $200 million mark in its seventh weekend, even after losing its IMAX screens to the Tony Stark adventure. In an age where a movie has legs if it does even 3.5x its opening weekend, the Dreamworks animated fable is on course to do five times its $43 million opening weekend numbers. It's currently the second highest-grossing 3D animated film, behind the $292 million earned by Pixar's Up. Of course, it will likely be down to fifth-place by late June, following the debuts of Toy Story 3 and Shrek Goes Fourth... I mean Shrek Forever After... no, wait, Shrek: The Final Chapter. It's also the third-highest grossing non-Pixar, non-Shrek animated film of all-time, behind Aladdin ($217 million) and The Lion King ($328 million).

Not much else to report otherwise. Furry Vengeance dropped 40% to gross $4 million in its second weekend (new total - $11 million). The documentary/glorified home movie Babies grossed just $2.16 million on 534 screens. Proving that the R-rated Nightmare On Elm Street was a boon to other young male-skewing PG-13 films, this weekend saw the collapses of Clash of the Titans (down 60% in weekend six) and The Losers (down 69% in weekend three). Clash of the Titans will have to settle for its current $432 million worldwide numbers, while The Losers will have to hope to find a home on DVD/Blu Ray (it's a surprisingly engaging, well-written, and well-acted B-action caper). The also-underrated Death at the Funeral has so-far grossed $38 million on a $21 million budget, so applause all around. Date Night has held up well as the second choice of casual moviegoers over the last month, dropping just 30% in weekend five and crossing the $81 million mark. The Back Up Plan is now at $30 million, meaning it will match its $35 million budget in the next week or two.

Join us next weekend, when Ridley Scott tries to cash in on Gladiator nostalgia with Russell Crowe in Robin Hood, forgetting that Gladiator opened to just $32 million on its respective opening weekend. Also, Amanda Seyfried tests her movie star muscle in Letters To Juliet, which is actually being well-marketed for a Summit release. Finally, Common and Queen Latifah also play in the romantic comedy waters in Just Wright. For a look at what happened at the box office this weekend in 2009 (Star Trek) or 2008 (Speed Racer), click respectively. For a look at what happened LAST weekend in the respective summer 2009 (X-Men Origins: Wolverine) and 2008 seasons (Iron Man), click respectively. Because summer started a week later than the last several years (Chronicles of Narnia: Voyage of the Dawn Trader moved from May 7th to December, causing Paramount to move Iron Man 2 from April 30th to May 7th), the 'look back' calender is out of whack and I should have started doing this last weekend. So, for this weekend only, I'll be linking to two prior weekends of past summer box office apiece.

scott will you please do a review of letters To Juliet?

Haven't seen it yet. My wife wants to see it, so I haven't attended any of the press screenings and/or today's national sneak preview. If I see it someone soon after opening, I'll do a review.