The fate of Law & Order is still up in the air. 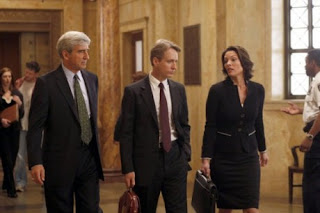 News broke around 2:00pm that Law & Order had been canceled just one season shy of beating Gunsmoke as primtime's longest-running drama. I just spent the last hour writing up an angry eulogy of sorts, only to find out that its not a done deal (that's what I get for writing anything based on news from Deadline Hollywood). At this point, rumors and inuendo are running wild. But the basic situation is that maybe the show is finished, maybe it will end up on NBC for another 13-16 episode season to finish its run, or maybe it will end up on TNT like Southland Tales (why not USA ala Criminal Intent?). I have the original essay saved. Hopefully, I won't have to publish it in its current form.

From your mouth to God's (or NBC's) ear!

It's official: "Law & Order" is canceled.

All's I can say is "wow," the end of an era. I've been watching this show since it first came on the air. (Though, like many people, after Jerry Orbach left I thought the show never fully recovered.) Time to start buying those DVD sets now...