To the surprise of absolutely no one who reads this site, Chris Nolan's Batman 3 claims July 20th, 2012 release date. 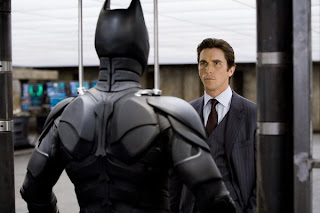 Sure enough, Warner announced yesterday that Chris Nolan's third Batman picture will be released on July 20th, 2012. Am I psychic? Nope, I just pay attention to the release date calendar. Continuing a trend that started almost by accident in 2007, Warner Bros. is continuing to put its big summer tent-pole on that mid-July weekend. It was a foregone conclusion that the third Batman movie would open on the same weekend as The Dark Knight, as well as the same weekend that has been pay-dirt for Warner over the last three years running. Until Warner runs out of mega-movies to open during the summer, count on Warner absolutely owning said weekend. A brief history of Warner's favorite weekend:

It started in July 2007. For, among other reasons, a sense that the fifth Harry Potter film would benefit from a release date close to the release of the seventh and final book, Warner Bros. slotted Harry Potter and the Order of the Pheonix to open on Wednesday, July 18th. It grossed $44 million on that first Wednesday and ended up with $139 million over the first five days ($77 million of that from Fri-Sun). Despite being released in the summer (where Harry Potter and the Prisoner of Azkaban ended with a series-low gross of $248 million) and being based on arguably the worst book in the series, Harry Potter and the Order of the Pheonix ended up with $293 million, becoming the highest-grossing Harry Potter sequel yet released at the time. The next year, Warner broke with Caped Crusader-tradition and released The Dark Knight not in mid-June like every other prior Batman movie, but in the same mid-July slot where they had struck gold the year before with the boy who lived. As most of you know, the film set an opening weekend record of $158 million and ended its leggy run with $533 million. Last summer, following a last-minute date change from November 15th, 2008 to July 15th, 2009, Warner slotted its sixth Harry Potter picture in the same Wednesday five-day weekend as the last chapter, and Harry Potter and the Half-Blood Prince scored another $159 million over its first five days before becoming the first Harry Potter sequel to cross $300 million.

This summer, Warner is planting its big summer attraction in the same weekend. Chris Nolan's Inception will open on July 16th, where it stands a chance to score the highest-opening weekend for a original and non-established property in history (the current record holder in that category is Avatar, which opened with $77 million last December). Next year, Warner has laid claim to the 15th of July, although expect Warner to shift that to Wednesday the 13th unless Iron Man 2 or The Twilight Saga: Eclipse takes out The Dark Knight's 3-day record. And, as expected, July 20th 2012 will be the launching pad for Chris Nolan's final Batman epic. What about July 19th, 2013? Well, I do believe that Warner has a Superman reboot in the pipeline, right? For those interested, you can mark your calendars in pen right now. Because Warner has found a release weekend that works for them, and they aren't giving it up anytime soon.