Yet another round of Release-Date Musical Chairs: Macgruber, Sex and the City 2, Fast/Furious, and more. 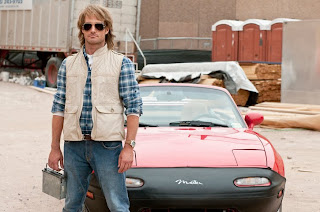 Lots of scrambling around the calendar in the last few weeks, as several high-profile pictures are bouncing around the release schedule. The biggest movie gets the least significant release change, as Sex and the City 2 moves from its Friday, May 28th opening all the way back to Thursday, May 27th. I presume that this is for the same reason that films open on Thursday, to combat international piracy as Thursday is often the day that films open in various foreign countries. This would seem to imply that Warner/New Line is going for a worldwide saturation opening for the sequel (and perhaps preparing for a massively front-loaded theatrical run?). The Joan Jett biopic has moved from its March 19th opening to April 9th, where it will face the opening of the Tina Fey/Steve Carell farce, Date Night. I can only presume that Apparition expects a pretty big gender gap for the Kristen Stewart/Dakota Fanning rock flick, so they are perhaps afraid of the Jennifer Aniston/Gerald Butler farce, The Bounty Hunter. Still, the demo-pleasing combo of Carell and Fey may be just as stiff in terms of competition.

The Sundance-winning thriller Winter's Bone will get a limited release on June 11th. Speaking of June 11th, that date for 2011 has been taken up by the fifth Fast and the Furious film, Fast Five (would it kill Universal to call one of these Faster and Furiouser?). What's interesting is that said release puts in place a possibility that summer 2011 will have nine consecutive weekends of $50 million+ openings. After Thor kicks things off on May 6th, we get a break until May 20th. From then on, we've got potential $50 million+ opening weekends (with several possibly opening closer to $100 million) opening weekends for... Pirates of the Caribbean: At Stranger Tides, The Hangover 2 and Mission: Impossible IV over Memorial Day, Kung Fu Panda: The Kaboom of Doom, Fast Five, Green Lantern, Cars 2 (which may move to December 2011), Transformers 3, Harry Potter and the Deathly Hallows part 2, and finally The First Avenger: Captain America. Have I mentioned how insanely crowded summer 2011 is going to be?

In a sign of uncommon confidence, Universal has moved its Saturday Night Live action-comedy Macgruber from April 23rd to May 21st, where it will be the main live-action attraction over Memorial Day weekend, and thus solid counter-programming against Shrek: Forever After. Universal has been testing the hell out of this one out in the LA area, and the date change into the heart of summer can only be a sign that the movie may just be as funny as its inspired trailer. No, I have not attended any of the said screenings, for three reasons. A) People like me aren't supposed to attend test screenings, so I only attend the ones I really want to see early. B) I don't see the purpose of writing about a clearly unfinished film, especially a comedy of this nature (where gags will be added in and out at seemingly random intervals). C) When you attend early test screenings of these kinds of comedies, you take the chance of spending your evening watching a glorified deleted scenes reel.
In a bit of older, but still worthwhile release date news, 21 Jump Street has moved into August 5th, 2011, as it will likely try to position itself as the last big film of summer. The Losers has been bounced back to April. Original slotted as an April release, the DC Comics/Vertigo adaptation moved into the June 4th slot, one week before The A-Team (if you don't know why that was funny, you don't care). But, perhaps due to issues of quality (although it looks like a fun, trashy hard-R action flick), The Losers has been moved back to April 23rd, where it will face the Jennifer Lopez comedy The Back-Up Plan and Oliver Stone's Wall Street 2: Money Never Sleeps. At least it won't have to face off against Macgruber anymore. Finally, As I mentioned in passing on my Twitter feed, Lionsgate has moved Season of the Witch from March 19th to... nowhere. The Nic Cage period horror adventure is no longer to be found on the current release schedule, meaning that it may end up joining Joel Schumacher's Blood Creek in going straight to DVD. Or, perhaps Lionsgate will allow the Demonic Sena picture to headline next year's After Dark Horror Fest.