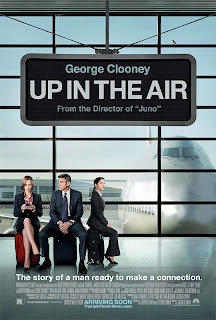 On the surface, Jason Reitman's Up in the Air is another variation of an oft-told tale, that of a workaholic who must learn to stop and reevaluate what he really wants from life and why he's really so driven in his chosen career. But the picture has two things going for it. First of all, it ends up being just a little bit deeper than that, going beneath the surface level moralizing of 'everyone should want a spouse and 2.5 kids and a dog'. Second of all, even if we concede that it tells a relatively unoriginal story, this is an awfully good variation on said template. It's sharply written and superbly acted, so there is much to appreciate and enjoy even if we acknowledge that its wisdom is not entirely groundbreaking.

A token amount of plot - Ryan Bingham (George Clooney) is a corporate downsizer, flying cross-country in order to lay off employees when their supervisors are unwilling to do the deed. Although his job is relatively ghastly on the surface, Ryan relishes his ability to give those fired a measure of dignity at their lowest moment. Moreover, he cherishes his nonstop travel, living in airports, hotels, and airplanes. Alas, a new employee, Natalie Keener (Anna Kendrick) has devised a system of employee termination via video conferencing, which would eliminate the need for Bingham to travel at all. A more positive development is an unexpected relationship with Alex Goran (Vera Farmiga), his apparent frequent-flier doppelganger. As Alex and Ryan hit it off during various stops in their respective business travels, Ryan brings along young Natalie for an up-close look at why the work he does cannot be replicated from a computer screen. As his two most defining traits - nonstop travel and personal isolation - are threatened, Ryan finds himself questioning the very tenets of his personal philosophy.

The idea of a somewhat cold executive realizing that he missed out on personal relationships isn't a new one. The difference is in the details, as Up in the Air is a refreshingly old-fashioned star vehicle that also works as a refreshingly old-fashioned character-driven comedy. It's simply the kind of movie that 'they just don't make anymore'. Clooney is in peak form, acting with silence as much as with witty wordplay. And Farmiga is the rare romantic interest who is more entertaining than the lead. Like the best romantic comedies, we actually get a true sense of why these characters like each other and why they might work together. Natalie Keener gets a star-making turn here. Even her somewhat contrived moments (such as a post-breakup meltdown) are handled with charm and wit. And while I'd prefer that so much of her arc not have involved (off-screen) romantic relationships, the character remains fully three-dimensional throughout. Plus, the scene after said breakup, where Natalie basically gets schooled by Ryan and Alex on the realities of 'settling', is one of my favorite moments in any movie this year.

To director Jason Reitman's credit, the film takes the world of corporate lay-offs as seriously as possible. With the exception of a few star cameos (J.K. Simmons, Zach Galifianakis), the masses of the fired are filled out by actual laid-off employees who were instructed to basically say to the camera what they never had the courage to say to their bosses upon their termination. The dreaded 'your position is no longer available' introduction becomes strikingly prescient, as Ryan wonders whether or not he is about to become a useless dinosaur in his own chosen profession. Jason Bateman plays the immediate supervisor, and he once again takes what could have been a stock cliche and makes him into a complete human being who completely understands Ryan's frustration but refuses to spend millions in wasted travel expenses just to assuage one employee's lifestyle choices. Over the last three years, Jason Bateman has become my absolute favorite character actor. Between this, Juno, Hancock, Mr. Magorium's Wonder Emporium, and State of Play, there is no one better at making mediocre films into good ones and making good films great.

Up in the Air is not revolutionary and its thesis, however insightful, is not one-of-a-kind. It also makes an all-too common mistake as it reaches a natural conclusion but continues for another reel. But it is the kind of thing we used to take for granted in Hollywood. It is well-written and sharply observational about the terrain in which it exists. It has big stars delivering solid movie-star turns and noted character actors making themselves noticed. It is funny, sweet, moving, and occasionally thoughtful. It is by adults and for adults, refusing to talk down to any demographic group. Up in the Air is just a darn good movie.

This is a fantastic, It is glad to see this blog, nice informative blog, Thanks for share this article.

This is a fantastic, It is glad to see this blog, nice informative blog, Thanks for share this article.