Princess and the Frog doesn't croak, and The Blind Side continues the mad dash. Weekend box office in review (12/13/09). 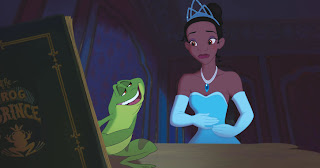 In what was neither a blast-off nor a crash, The Princess and the Frog marked Disney's return to 2D animation with $25 million in its debut weekend in wide-release. Mid-December releases are notorious for insanely long legs. The last traditional 2D Disney cartoon to open in this slot, The Emperor's New Groove (the funniest toon of the decade and Eartha Kitt's finest hour) in 2000, made 9.1x its $9.3 million opening weekend ($89.3 million). So it's tough to ascertain long-term prospects for this one. So let's just concentrate on the opening weekend. First of all this movie is pretty terrific. It's funny, emotional, scary, and genuinely romantic; so everyone who has kids or likes animation should really make a point to check it out before the end of the year. Second of all, the cold truth is that this opening was actually pretty weak. When you consider the publicity that this film received for its 'groundbreaking' African American characters and the buzz over the return to traditional 2D cell animation, I'm pretty sure Disney was hoping for at least a bigger opening than Bolt or Meet the Robinsons. Heck, it barely beats out the October 03 $19 million opening of Brother Bear when adjusted for inflation ($23 million at 2009 prices). And it certainly sold fewer tickets than the various $20-$22 million openings of The Hunchback of Notre Dame, Hercules, Mulan, and Atlantis: The Lost Empire back when Disney was in an alleged post-Lion King 'slump'.

Having said all of that, in terms of pure dollars, it still had the biggest 2D opening since Lilo and Stitch, which opened with $35 million back in June, 2002 ($43 million adjusted for inflation). Besides, this film was very much a 'girl movie', and there has always been a certain hesitancy for boys when it comes to seeing female-centric entertainment. Girls will flock to The Lion King or Tarzan, but guys have to be dragged to Mulan. I won't go so far as to say that women (and men) should flock to movies like this in order to convince the studios to make more, as that's not my business. But I will say that Princess and the Frog is a worthwhile antidote to the discomforting gender politics in New Moon (down a reasonable 48%, new total - $267 million). And the $105 million budget is actually quite a bit less than the $175 million-ish budgets of the recent Pixar or Disney 3D works and/or the Dreamworks features. So it doesn't have to do Pixar business to make a tidy profit. And, as noted above, it's a very good movie, so I imagine there's a decent chance of real legs as it becomes the family movie of choice for the rest of the year. Yes, Alvin and the Chipmunks: the Squeakuel will open big on Christmas Day, but it won't have the staying power of the first film as there will actually be demo competition this time. If you're a parent, which film would you rather take your kids to? And Disney seems to be playing a long game with their prized animation library. No one should have expected Disney to hit Lion King numbers ($41m/$70m adjusted) the first time out anymore than they should have expected Michael Jordon to score 55 points in his first post-retirement comeback game. The traditional 2D animated film started dying out right around the time that opening weekend numbers exploded (summer 2001), so there's only so much fair comparison to be made between this 2009 film and the films from the lower opening but leggier 1990s. Point being, I sincerely hope that this frog's legs are strong during the brutal one-two punch of Avatar and Sherlock Holmes over the holidays.

Coming in number two is The Blind Side, which dropped just 22% and crossed the $150 million mark at the end of its fourth weekend. It still has a shot at $200 million, if it can keep the screens during the holiday deluge of new releases. And any awards action will surely be of benefit. Expect it to become Sandra Bullock's highest-grossing film by next weekend at the latest. Not much new to say about it. It's a darn good movie, far better than I was expecting, and I'm happy it's doing so well. Third place went to Invictus, the Clint Eastwood drama concerning Nelson Mandela's (Morgan Freeman) attempts to reunite a post-apartheid South Africa through rugby. With $9.1 million, this film is about in the same opening weekend-boat as Mystic River, Million Dollar Baby, Flags of our Fathers, and The Changeling. Whether or not this will end up like Mystic River and Million Dollar Baby ($90 million and $100 million respectively) or the other two (less than $33 million and $35 million) will depend on word of mouth and awards-buzz. Still, this may do better overseas where the characters and sport are better known and admired.

A Christmas Carol dropped just 12% for a new total of $124 million. It's still a little ahead of The Polar Express, but it's likely going to get hammered next weekend when it loses its IMAX and 3D screens to Avatar. Not even the beloved Coraline could survive such a rout. It dropped 54% the weekend that Jonas Brothers: A 3D Concert Experience opened and 85% once Aliens vs. Monsters opened. So this is likely the last decent weekend for the under-appreciated cartoon. Also not in its favor is the fact that Disney will be turning most of its attention to The Princess and the Frog as it attempts the Oscar double-whammy of Up winning Best Picture (could happen) and Princess and the Frog winning Best Animated Film. One could argue that Disney hurt both major cartoons by opening them so closely together, but that's an discussion for another day. Brothers dropped a disturbing 47% and now sits at just $17 million. It will likely make back its $26 million budget and not much more. Armored dropped 46% and now sits at $11 million. It will struggle to approach its $20 million budget, and that's a shame. This lean and mean little thriller deserved better, and I sincerely hope it becomes a rental and cable cult film.

In the land of limited release, Up in the Air just barely missed the top ten, grossing $2.4 million on just 72 screens ($34,028 per screen). While still impressive, the film's fate won't be told until the Golden Globe and Oscar nominations are announced, to say nothing of the wide release on an already packed Christmas day. A Single Man debuted on nine screens for a $216,000 weekend and a somewhat meager $24,000 per screen average. Me and Orson Welles expanded to 40 theaters but mustered just $2400 per screen. Why this theoretical Zac Efron vehicle didn't just open wide to capitalize on his fanbase, I do not know. But it now appears that said fanbase will have to wait for DVD to see this one. Even more disappointing was the 3-screen limited release of Peter Jackson's The Lovely Bones. Battered by mixed reviews and a shifting release date (it was supposed to go wide this weekend instead of January 15th), the film scored just $116,000 for a $38,667 per screen average. With the news cycle soon shifting into all things-Avatar, this $100 million film is pretty much dead in the water until its wide release. Considering the lack of competition this weekend and the lack of positive buzz for this one, it would seem that Paramount made a huge and possibly fatal mistake with their super-limited opening.

But the real news of the weekend is the jaw-dropping plunge of last weekend's champion of lame, Transylmania. Following a near-record per screen average of $262, the comedy lost 889 of its original 1001 screens. Plunging an unheard of 94% in its second weekend, the film grossed an astounding $15,400 second-weekend. That's $131 per screen over three days. That's $44 per day. Presuming four showings, that's a whopping $11 per showing, or about the cost of 1-2 tickets depending on where you live. If you were lucky enough to end up in one of the remaining 118 theaters, you likely could have done drugs, had sex, committed murder, and/or plotted a terrorist act without any witnesses to speak of. Since Full Circle Films now has nothing to lose, I'd advise them to use these impressive statistics as a promotional tool for the eventual DVD release. "See the film that absolutely no one saw in theaters! Be the first (and last) on your block, township, city, state, and region to see Transylmania!"

That's all that's fit to print for now. Next weekend gives us the Hugh Grant/Sarah Jessica Parker comedy: Did You Hear About the Morgans?. We also get the limited releases of Nine, The Young Victoria, and Crazy Heart (starring Jeff Bridges as Kris Kristofferson). As for that other wide release, just remember that the biggest December opening is I Am Legend's $77 million. And the biggest opening for a non-sequel/franchise/adaptation/star-vehicle is The Day After Tomorrow's $68 million back in May 2004. So don't starting sounding the bell of doom, ala King Kong, if Avatar only opens to $60 million. The real test will be how much it makes over its second weekend.