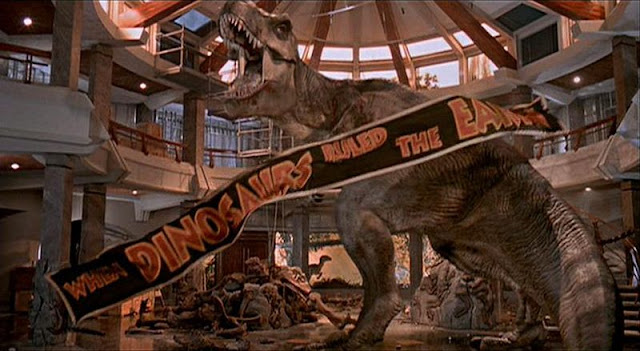 I'll make this simple.  My first theatrical viewing of Jurassic Park remains, without question, the best theatrical movie going experience of my life. It encapsulated pretty much everything good about the theatrical experience, including any number of elements that are perhaps non-replicable in today's film culture.  The viewing was an unexpected advance-night screening, back before every movie opened on Thursday at 12:00 am, if not 10:00 pm or earlier.  Jurassic Park had a whole slate of advance screenings on Thursday the 10th of June, starting at I believe 8:00 pm.  I had presumed I would be seeing it sometime that weekend, but my mother informed me that my dad was coming home from a business trip and he was picking me up in time for a 10:00 pm screening.  Obviously excited, I hurriedly rushed to finish the original Michael Crichton novel that I had been blazing through.  We got to the theater early enough and the auditorium, as well as the auditoriums around us, were absolutely jammed packed.  Everyone was excited to be there, but nobody really knew what they were in for.

You see, you have to remember this was 1993.  There was no Internet.  There were no published test screenings or embargo-busting reviews.  Most reviews for new movies were published in the Friday edition of the local paper.  Heck, most reviews even in rags like Entertainment Weekly would appear in the issue dropping on the Friday or Saturday of opening weekend.  So as lucky ticket holders for an advance-night showing, we got to see Jurassic Park having absolutely no idea if it would be any good or not.  And thanks to a relatively restrained marketing campaign, we also didn't know the major 'money' shots weeks in advance.  We didn't know every major plot reveal or character moment via released clips online or the filmmakers discussing who would or would not be in a theoretical Jurassic Park II.  If the studios didn't want you to know something about a film back then, you didn't know it.  And Universal made sure paying consumers like myself and my dad knew very little about what was about to transpire.

Oh, and those dino effects?  Yeah, the marketing kept most of that offscreen too.  Nobody, but nobody knew how astonishing Stan Winston's special effects were going to be.  That iconic moment 22 minutes into the film when Dr. Grant, Dr. Sattler, and Dr. Malcolm see the brontosaurus for the first time?  That moment of jaw-dropping astonishment perfectly set to John Williams's classic theme?  Yeah, everyone in the audience felt the exact same way.  No one expect the dinosaurs to look *this* real.  Also kept under wraps was the sheer quality of the film.  Steven Spielberg was coming off of Hook, not exactly his finest hour, and he had somewhat struggled since E.T. nine years earlier.  Oh the Indiana Jones films did fine box office-wise (although the meme was still that the second was too mean and the third was too campy), but his venture into serious projects like Empire of the Sun and The Color Purple didn't strike as much of a chord as hoped (although we forget that The Color Purple made nearly $100 million in 1985 and earned several Oscar nominations).  Point being, nobody knew if Spielberg still had the goods.

Well yes, Jurassic Park was *that* good, an exciting, funny, and surprisingly scary thrill ride that felt like a perfect merger of the horror of Jaws and the wonderment of E.T.: The Extra Terrestrial.  Those who bought into the false meme of Spielberg as a no-harm, no-foul shiny-happy-fluff filmmaker were shocked by how intense and violent the picture was, putting its adult and kid characters directly into harm's way with zero apologies.  Did your audience scream when the cup of water started vibrating?  Did they shriek during the climactic kitchen chase?  My audience went absolutely nuts for the scare right after Laura Dern restored power to the park.  "I think Jurassic Park is back online!"  The jump scare that followed was so perfectly timed and the audience's reaction so thunderous that most of us missed the fact that Samuel L. Jackson had just been killed offscreen.  But more than just a thrill-ride, Jurassic Park remains a thoughtful and compelling adventure movie.  And we loved every crowd pleasing minute of it.  As my dad and I drove home, we passed my brother and his friends driving elsewhere.  My brother asked us how the movie was.  My dad merely shouted that "It was awesome!".  And it was...

Twenty years later, that screening serves as a perfect encapsulation of why we love movies.  It was a major film that absolutely delivered the goods both on the screen and on the page, offering characters just quirky enough ("I wonder if they'll have *that* on the tour...") and dialogue just thoughtful enough ("We spent so much time wondering if we could we never stopped and considered whether we should!") to make it more than just a pure genre exercise.  Its quality was a complete and total surprise because the studio had the good sense to let us discover the goods for ourselves.  And that 10:00 pm screening is the reason I'm such a junkie for the now somewhat common and almost mundane midnight/advance-night screening, as well as the reason I was so angry by what transpired in Aurora last July.  In the two decades that followed, the movies got a lot less surprising.  The studios became more and more willing to spoil the fun as a matter of marketing, fully expecting that a film would play itself out by the end of the second month anyway.  The once thrilling excitement of seeing a movie just before opening night before a single review had been published gave way to long-lead embargoes that established a film's critical consensus before most critics had seen it, let alone paying audiences.

There has been a lot of talk lately about how the studios have basically turned to outright spoilers as a form of pre-release marketing.  20 years ago, Jurassic Park was a perfect example of keeping it close to the vest.  Audiences discovered how good the film was and how wonderful its best parts were all by themselves, allowing true word of mouth to take hold for a now unthinkable year-long theatrical run.  It was the last of an era.  It was the last film to run that long in any theaters and it was the last blockbuster to truly take advantage of the second-run theatrical play.  And while it's not entirely true, Jurassic Park feels like the tipping point from surprise smash to preordained blockbuster (nobody thought it would be as massive of a hit as it was, becoming the highest-grossing film of all-time worldwide for a few years).  But it all comes down to a young movie fan thrilled to unexpectedly see a sneak preview of the summer's most anticipated film, sitting in a crowded audience as everyone, son, father, and everyone else around them, thrilled to the onscreen spectacle that was actually every bit as good as they could have possibly hoped.  *That* was Jurassic Park.

speaking of a retro movie, are u gonna do a tribute to ebert? a sad day.

I wondered back in 1993 and I wonder now, what is so special about a Westworld retread with dinosaurs? Yes, seeing a properly anatomically designed T-Rex chasing people around was neat as well as the Raptors being the real major threat, but it seemed otherwise felt so pointless as a story.

The main attraction of the film is the dinosaurs, which represent cinematic bliss at its finest. Beyond that, there is plenty of ethical and familial subtext and humor for those who want it. It is certainly not a pointless story, unless you consider consensus-making entertainment "pointless" - in that case, your negative opinion is truly pointless. Lastly, suggesting that Jurassic Park is a retread of Westworld is laughable oversimplification, a fanboy remark if I've ever read one.