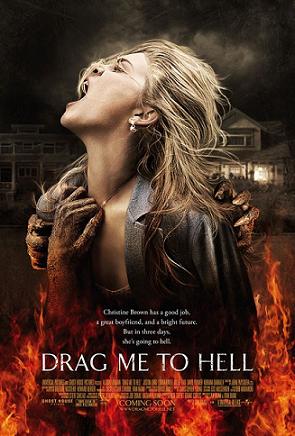 Brandon Peters has returned! Leading up to the April 5th release date of the new Evil Dead remake, Mr. Peters will be doing his voodoo with the Evil Dead series. He continues with a bonus look at Drag Me To Hell. For those who want my original theatrical review, go HERE. Otherwise, without further ado...

If you’re question why I covered this film in my EVIL DEAD retrospective series, then you’ve never seen Drag Me To Hell.  And if you haven’t seen Drag Me To Hell, stop reading, go out and Netflix or BUY it (it's like $5 at Fry’s).  You've been missing out on one of the best horror films of the previous decade.

Welcome back.  So yeah, you can see how Drag Me To Hell is a sister film to the Evil Dead series.  This film is almost as if the deadites vacationed away from the woods.  Jason took Manhattan, what if the deadites went to LA?  This film perfectly melds the horror and scares of the original Evil Dead along with the gross outs and laughs of Evil Dead 2/Army of Darkness.  We even get the car!  What you get in this film is genuine and plot focused jump scares and eerie/suspenseful quiet moments that keep you on your toes along with scenes that make you want to puke and scenes that go over the top and make you laugh.  I honestly feel like I went on Double Dare after watching this film.  So much, blood, goop, bugs and mud to keep things dirty.

The film has a wonderfully sympathetic protagonist in Christine.  Alison Lohman is sent through the ringer in this film.  A lot of stunt work, wrestling, getting covered in blood/goop and just getting down and dirty.  It’s an insanely physical role.  Its very similar to what Bruce Campbell was put through in the Evil Dead series.  And this poor girl is put in a difficult situation, makes a difficult choice because she is pressured to and has to pay this ultimate price for it.  Raimi does a fantastic job of making us feel for this girl feeling pressure in her life from all sorts of angles not involving curses.  The only thing that isn’t a challenge is her boyfriend who is in for the long haul and is dedicated to being there for her no matter her faults/shortcomings.  The only problem is she really wants to go out of her way to impress him when we all know she really doesn’t need to.

I feel like every Halloween we need to be talking about Drag Me To Hell.  While the evil in the film is heavily similar to the Evil Dead franchise, it's quite a thrilling original horror film that delivers on many levels.  My only qualm is that some of the CG is fun, but looks fake (should have gone fully practical).  And how is this movie rated PG-13?  Man, the things they get away with now...  While I watched the Unrated cut, it was the same length as the PG-13 cut…so I don’t know what all was different.  Anyhow, see Drag Me To Hell if you haven’t.  It's the Evil Dead  movie you'd been clamoring for before even this remake came to fruition.

I tried to get my wife to watch this, as she doesn't like horror movie and this would have been extreme for her.  I wanted to take joy in her jumps and getting totally grossed out.  Cuz, if you can't watch something like this for the first time, its most fun to watch it with someone who is seeing it for the first time.

“Join Us” next time as I rank the EVIL DEAD franchise

The unrated cut is actually worse than the PG-13 cut, because it adds all of the noticeable CG gore.