A place at the table: Patty Jenkins (Monster) to direct Thor 2. Why it matters. 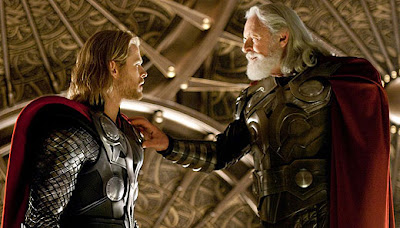 Variety has apparently confirmed that Marvel Studios is indeed in talks with Patty Jenkins to replace departing Kenneth Branagh in directing Thor 2, which is due for release on July 26th, 2013.  I generally don't comment on news about who is 'in talks' or who is 'on the wish-list', but Patty Jenkins inclusion on this specific wishlist is worth commenting on.  Jenkins is best known for having helmed Monster, which won Charlize Theron a Best Actress Oscar in 2003 for her portrayal of serial killer Aileen Wuornos.  Since that triumph, she has unfortunately been relegated to directing occasional episodes of television, most recently helming the pilot for the AMC series The Killing.  This is a pleasantly out-of-left field choice that plays to Marvel's greatest strength as a studio, picking talented filmmakers who aren't necessarily known for comic book spectacle and/or aren't 'the hip new flavor of the month'.  While much of the coverage will focus on 'YAY, Marvel is possibly hiring the first-ever woman to direct one of its superhero movies!', there are two things worth noting.  First of all, Lexi Aexander, who directed Punisher: War Zone in 2008 (review) is also of the female persuasion.  Second of all, the lack of credits on Jenkins's IMDB page brings up a troubling double-standard.  Had a male, arguably any male, directed a critically-acclaimed and Oscar-winning drama like Monster, they surely would have been on every studio's wishlist for every major project (see Hopper, Tom or Forrester, Marc).  But, Jenkins has barely worked in the last eight years.

The problem is of course not there there is a fiendish conspiracy to keep female directors out of the big leagues.  The problem is that there is an expectation that female directors cannot possibly helm the kind of pulpy, big-budget and special-effects-filled genre pictures that currently dominate the landscape.  I joke about it quite a bit, but why couldn't Sophia Coppola helm the next James Bond picture?  For that matter, why can't Drew Barrymore, who juggled a large ensemble cast with the dynamite Whip It, take over for the rebooted Fantastic Four franchise?  Why did it take Kathryn Bigelow winning a bloody Oscar for Hollywood to take her seriously?  Hell, why has Mimi Leder, who helmed two big-budget genre pictures (the emotionally engaging Deep Impact and the ahead-of-its-time The Peacemaker) been in the proverbial doghouse for ELEVEN YEARS (!!) following the disappointment of the character drama Pay It Forward?  She is only just now prepping for her first big screen feature since 2000, a remake of All Quiet On the Western Front.  Not only is it almost impossible for female directors to be considered for films that aren't stereo-typically 'womens' pictures', but once they do get their foot in the door, it's One Strike And You're Out! (as opposed to someone like Marcus Nispel, who fails with Pathfinder and then is given $90 million to fail with Conan the Barbarian).

The real progress of Marvel hiring a female to direct one of its comic book tent-poles is not that a woman is directing a big-budget comic book film (Punisher: War Zone cost just $30 million and more-or-less tanked).  It's the potential for female directors writ-large to be considered on the same 'wish-list' as male directors when the next big action picture or fantasy spectacle goes into pre-production.  Once we see at least one or two female names on the studio wish-lists for the next 007 film or the next big comic book adaptation... that's real progress.  What are your thoughts?  What female directors do you think deserve a shot at directing more mainstream genre product?

Sophia Coppola directing 007! What an innovative, daring idea. The field of children animated films also appears to be a male dominated landscape so pixar which usually is on the cutting edge of things should take some initiative on that. Jane Campion has been grossely underused in the past and her adaption of The Portrait of a Lady is equally misunderstood and underrated. She has a knack for bringing excellent actors together which never hurts a mainstream big-budget picture.