An oft-told tale: Why Point Break is this era's Invasion of the Body Snatchers. 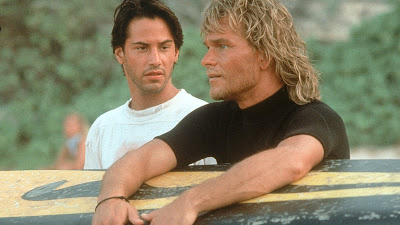 The film world rolled their eyes in collective disgust yesterday after it was announced that Warner Bros. was financing and/or distributing a remake of Kathryn Bigelow's Point Break.  That 1991 cult-favorite of course starred Keanu Reeves as FBI Agent Johnny Utah, who goes undercover as a surfer to catch a gang of bank robbers, led by Patrick Swayze, who pull heists to finance their endless summer.  The film is cheesy to the point of being high opera, but I always admired how straight-faced it was, and how seriously it took its violence.  The picture takes awhile to achieve a body count, but when it does, its jolting.  In this film, the loss of any life, be it an innocent bank guard or one of the robbers, was tragic and cause for mourning.  And the finale was refreshingly grim, acknowledging that a violent crime story doesn't have a happy ending just because the bad guys all died.

Anyway, the film is now best known for an uncommonly over-the-top Keanu Reeves performance, which I've argued is pretty much the basis for the countless cheap jokes at his expense. When people call Reeves a bad actor, they are referring to his (I'd argue appropriately) hammy turn as Johnny Utah (he's usually very understated in that Harrison Ford/Kevin Costner fashion that is often mistaken for 'wooden').  The film has even inspired a bawdy comic stage show, where a member of the audience is picked out to play Utah in their best/worst Keanu Reeves impression as the rest of the actors perform the film mostly verbatim in a most overindulgent fashion.  It's funny, but merely serves to remind us that anything and everything can be mocked if viewed from a satirical point of view or when performed incorrectly.  For example, there is a reason you cast John C. McGinley to read dialogue plainly written for John C. McGinley.  So anyway, yes, yet another not-quite classic from the mid-1980s or early 1990s is getting a remake.

BUT, you ask... hasn't Point Break already been remade?  Wasn't there an unofficial remake of the picture back in summer 2001?  Wasn't it merely a recasting and a change in venue, going from surfers and bank robbery to street racing and truck hijacking?  It's no secret that the original Fast and the Furious is basically a carbon copy of Point Break, from the general character arch types (Keanu Reeves, Patrick Swayze and Lori Petty = Paul Walker, Vin Diesel, and Jordanna Brewster) to pretty much every major story beat.  They end in almost the same fashion, although hopes for a franchise prevented the film from mimicking the predecessor's grim fate for the street racing rogues.  The fact that Point Break has already had an unofficial remake yet again brings to mind something that I've been harping on for awhile: that I miss the age when studios would merely rip off their older movies rather than just remake them.  In this current cycle, Disturbia would be almost refreshing, as it is merely a riff on Rear Window and Fright Night instead of an out-and-out remake of either of those pictures (it's also 20x better than the recent Fright Night remake, natch). 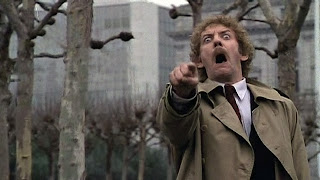 So if Point Break is now getting its third variation in twenty years, might it be too soon to declare that the film is indeed this era's Invasion of the Body Snatchers?  If you recall, Invasion of the Body Snatchers was made four times,  The original debuted in 1956, with remakes or re-imaginings dropping in 1978, 1993, and 2007.  Each film had the same general premise (aliens spring from pods and take over the bodies of those around us), but each changed the locale and the social/political meaning to match with the issues of the day.  The first one was, depending on who you ask, about the dangers of Communism or an attack on Joseph McCarthy and his ilk.  The second film was (simplistically speaking) a look at the post-Watergate/post-Vietnam paranoia, while the third took place on a US army base, where like-minded and like-acting pod people blended right in.  The fourth, an infamous Nicole Kidman/Daniel Craig box office miss (following oodles of post-production tinkering) posited that a world populated by emotionless pod people would be more peaceful than one populated by normal Earthlings.  Good or bad (and I like all of them to varying degrees), they all were absolutely of their time, both in commenting on the politics of the day and forever warning moviegoers of the inherent danger of conformist behavior.

While I would not call either Point Break or The Fast and the Furious great works of social commentary (although for what it's worth, I vastly prefer the former to the latter), they both use somewhat off-the-beaten path sporting activities as a metaphor for untamed freedom versus the crushing weight of 'civilization' and order.  This new version will allegedly involve the world of 'extreme sports', and it certainly fits with the template.  They are both classically western, as most American action films are, pitting law and authority against lawlessness and unquestioned freedom.  While the shoe doesn't completely fit (surfing has become mainstream while street racing remains illegal), the outline exists for yet another arch-typical journey of a man in authority who falls in with the free-spirited criminals he is supposed to be catching and eventually joins their world, if only in a spiritual sense.

I'm not saying that studios choosing to remake a 20-year old action picture that already had an unofficial remake does scream of the kind of lazy and frightened decision making that currently grips the industry.  But what I am saying is that maybe there is a reason why this specific story keeps getting told once every decade.