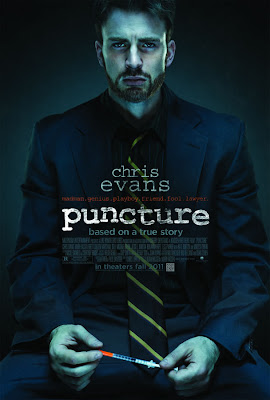 Adam and Mark Kassen's Puncture, with a screenplay by Chris Lopata and a story by Paul Danziger and Ela Thier, is a rare film based on a true story where one cannot help but wonder if the actual nonfiction version is more interesting than what we see on the screen.  The film details a true story of a suit filed by a young nurse (Vinessa Shaw) who was pricked by an HIV-contaminated needle while on the job.  But the film spends less time on the legal aspects of the case than on the personal life of its lead crusader.  That the film would rather be a character drama than a legal thriller is I suppose admirable, but the legal story is far more interesting than the character melodrama.


The lead character in question is Mike Weiss (Chris Evans), who runs a small personal-injury firm with Paul Danziger (Mark Kassen).  The firm basically survives on Mike's legal acumen and Paul's business sense, with the occasional support of their friend Daryl (the underutilized Jesse L. Martin), who refers small cases that his bigger firm won't be bothered with.  Weiss becomes emotionally invested in the plight of Vicky (Shaw), who is quickly dying and wants her death to mean something.  Alas, Weiss has his own issues, as his personal life (drugs, prostitutes, etc) becomes a liability, both in terms of his ability to do the job and his ability to get high-profile support for the cause.  As the corporate attorneys (personified by Brett Cullen's Nathaniel Price) put their pressure to bear to make sure that Safety Point needles never make their way into hospitals, Weiss and Danziger start to realize just what it costs to do the right thing, and whether or not either of them can afford it in the end.

The crux of that suit is that the hospital had refused to purchase a new, safer needle despite its ability to save lives.  Issues are brought up regarding what duty a private entity has to buy and implement an improved version of a given product, and whether or not large corporations would rather save money in the short term rather than in the long term (we all know the answer to that one).  As mentioned above, the legal drama takes a backseat to the slow destruction of Evans's protagonist, as the actual litigation doesn't really even begin until the second half of the picture.  That leaves about 50 minutes to get through quite a bit of legal maneuvering, and the second half of the picture feels rushed where the first half felt somewhat running in place.

The film has an admirable buttoned-down tone, with claustrophobic interiors and a certain low-to-the-ground nitty-gritty nature that makes it feel more realistic than a more open and rousing legal drama.  The film is filled with strong performances, although Evans and Cullen get the majority of the juicy material.  At its best, the film is a sobering reminder that having an impassioned and emotionally-invested attorney on your side may be as much of a hindrance as a help.  The last reel or so hammer home the true difficulty of a would-be David indeed triumphing over Goliath, especially without any help from sympathetic Goliaths elsewhere.

This is not an inspiring 'triumph for the underdog' empowerment fable, but a somber, occasionally contemplative drama about the high cost and often lack of reward for doing the right thing.  While it is admirable that Puncture focuses on its not-entirely sympathetic lead character over the procedural of civil litigation, it loses sight of what makes its story unique.  The aftershocks of the actual case, good and bad, are indeed noteworthy, and the film gives its true story a token disservice by focusing on another damaged would-be savior.  It is technically two stories for the price of one, but it falters in the end because it miscalculates which story is the most worthy of being put on film.