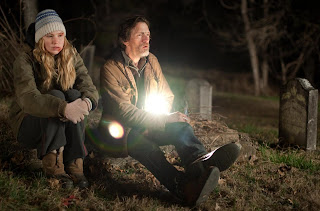 The first major awards show of the year started the season on just the right note. Winter's Bone, easily the best live-action picture of the year so far, scored the Best Feature Award, while also winning Best Ensemble Performance (yay for John Hawkes). Somewhat surprisingly, Jennifer Laurence did not win the Best Breakthrough Performance award (she lost to Ronald Bronstein), but she'll have to make due with a surefire Oscar nomination in a month or so (if I had my way, she and Natalie Portman would just both win the Best Actress Oscar and call it a night). The film and its cast and crew landed seven Film Independent Spirit Award nominations this morning, including Best Picture, Best Female Lead (Jennifer Laurence), Best Director (Debra Granik), Best Screenplay (Debra Granik, Anne Rosellini), Best Supporting Male (John Hawkes, who damn-well better win), Best Supporting Female (Dale Dickey), and Best Cinematography (Michael McDonough). Winter's Bone is the best film of the year that isn't Toy Story 3. Glad to see the awards season on the right track from the get-go.
Scott Mendelson
Posted by Scott Mendelson at 9:40 AM