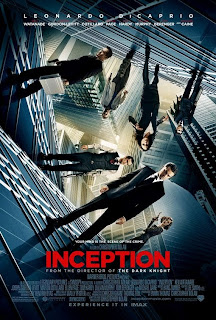 I have never understood the idea that Chris Nolan is a cold man who makes cold films. While he is a brilliant craftsman and a technical genius, his films have always had a vibrant heartbeat at the center. Whether it's amnesiac Leonard struggling to retain his humanity, rival magicians Robert and Alfred slowly wrecking their lives in a pointless game of one-upmanship, or James Gordon trying to fight corruption in a city that runs on graft, Nolan's films generally remember to put the human element above the spectacle or gimmickry. But, for the first time, Christopher Nolan has made a film that embodies the Chris Nolan stereotype. Inception is a visually dazzling, exceedingly intelligent, and possibly ingenious puzzle box. But the human element takes a backseat to the visual wonderland and the plot mechanics. For the first time in a Chris Nolan film, I didn't have any real emotional investment in the characters.

A token amount of plot - Cobb (Leonardo DiCaprio) is a leading specialist in a form of industrial sabotage called 'extraction'. Basically, he and his team enter the dreams of their target, in order to steal information that the victim keeps in his or her own mind. After a job goes bad, the team ends up on the run, but the former mark (Ken Watanabe) offers Cobb a counter-offer. He wants the dream team to try something called 'inception', whereby a person has their dreams invaded for the purpose of planting, rather than extracting, information or an idea. It's an incredibly difficult thing to accomplish, but the rich and powerful Saito has offered Cobb a bonus upon completion: Saito will have Cobb's criminal record cleared so that he can return to America and see his two children again.

Plotwise, that's really all you need. As far as the complicated narrative and the various twists and turns, the film works like a puzzle game such as Tetris: easy to learn, easy to play, challenging to master. The broad strokes of the story and the major rules of the dream worlds are clearly spelled out for anyone simply awake and paying attention. Ellen Page plays Ariadne, who is hired to build the dream world for the 'big job'. While Page does what she can, her character is around purely for exposition. She is our surrogate into this new world, learning how to play in the dream world and what the guidelines are. Later, she becomes a source of emotional exposition, as she is the one who gets to engage Cobb in various bits of character back-story (DiCaprio's Cobb is the only person who gets any kind of character development to speak of). While the first hour of the film is basically set-up and exposition, it's actually quite engaging, as we get to learn the nitty-gritty details of just how one goes about creating a dream for a mark and then invading that dream for illicit purposes.

Alas, once the actual caper goes forth in the second hour, the film becomes a visually scrumptious but emotionally hollow thrill-ride. Almost immediately upon entry into the mind of Robert Fishcer Jr., son of a dying energy industrialist (played by Cillian Murphy), the film devolves into a series of action sequences. Chases, shoot-outs, fights, and explosions abound. But since we know that all of the opponents in the dream world are just projections and not flesh and blood people, there is no weight to the violence. Yes, the action set-pieces are proficiently staged (and more smoothly edited than the action beats in Nolan's Batman pictures), but a huge chunk of the second hour of the film is basically Cobb and his team shooting at unreal targets whose 'deaths' have no moral consequence and thus no impact on the audience. It often resembles watching someone else play a video game, complete with characters jumping from one level to another, each with a different locale and difficulty level. Yes, the IMAX screen obviously increases the scope and scale of these set pieces, but since I didn't find the thrill-ride elements all that thrilling, I can't say that the film will lose much on a traditional screen.

The characters on Cobb's team have no development or backstory, and whatever impact they have derives strictly from the actors who play them. Joseph Gordon Levitt and Tom Hardy have fun as the researcher and the muscle respectively, as both have big action moments in the second half (a zero-gravity hallway fight and a snowbound invasion of an impenetrable fortress). It is Leonardo DiCaprio's Cobb who gets every ounce of character and the only one who gets anything approaching an arc, that involving his coming to terms with the death of his wife (Marion Cotillard) and how it affects his work in the dream world. While the back-story is interesting and the ideas it brings up are engaging, the film fails to make us care on an emotional level. Aside from those bits of emotional back story, the film basically plays out like a sci-fi variation on John Frankenheimer's Ronin. Both pictures are ice-cold action pictures involving a ruthless team of mercenaries who accept a dangerous, but somewhat ill-defined job. Both films are entirely concerned with the minutia of planning and then carrying out said job, with little thought given to the moral implications of success or failure. Both films feature a token back story for the leader of the team (Robert De Niro in Ronin), and a minor character played by a notable actor (Sean Bean in Ronin, Lucas Haas here) who gets kicked off the team early on in the film. Both are exceptional genre pictures and contain solid action sequences, and both seem unconcerned about whether or not you care about what's transpiring onscreen beyond a visceral level.

Here's where it gets tricky to critique a movie like Inception. As expected from the man who made The Prestige and Memento, Inception operates on several levels. There can be several interpretations in regards to what the film is 'all about', and any of those interpretations could be right or wrong (Penrose's never-ending staircase is featured prominently). Like a video game that is so clearly resembles, Inception is a film that can be viewed two ways. One can watch the film on the surface level, making it from one scene to the next, going along with the plot and making it to the end for a mostly satisfying movie-going experience. On the surface, it is about what most of Nolan's films are about: how flawed men lie to themselves to cover up the moral failings they can't live with. Or, one can see the film multiple times and navigate around the edges, straying off path to find bonus items, hidden secrets, and buried treasures. Ironically, many of the 'deeper meanings' are similar to those found in the infamously derided climax to Steven Spielberg's AI.

So do I praise the film for having multiple levels of complexity and having enough sub-textual material for several viewings, or do I simply judge how the film works for a general moviegoer seeing the film once in a theater? On the surface, Inception is a sci-fi heist picture, a dreamworld variation on Ronin or The Italian Job. But both films, while less intelligent and ambitious, had a greater viewer investment in the onscreen action (when innocent bystanders got shot to ribbons in the streets of Paris, or when Donald Sutherland was gunned down in the opening reel, it mattered). In its objective coldness and attention to procedural detail, it resembles the first Mission: Impossible (another film that wasn't nearly as surface-level complicated as many claimed). But, at the end of the day, however much credence I give to the possible deeper meanings of Nolan's brainy blockbuster, I must concede that I was less engaged by Inception than I was with any of Nolan's prior works since he broke out with Memento ten years ago. The film may in fact reward multiple viewings and those repeat viewings may reap added rewards. But the cold truth is that I will have to force myself to buy another ticket to Inception, rather than just wait until DVD/Blu Ray to experience it again. Chris Nolan has made a fine, intelligent, and viscerally engaging cinematic experience that is one of the more entertaining pictures of the year. That's enough for me.

Scott, I never looked at the film that way. I look at the subject matter about changing your reality and that's enough to pull me in. It's nice to see a more objective approach. Now that you point it out I do see how Ariadne was an expository figure and it was difficult to get involved with the characters, which were sidelined by the complex plot