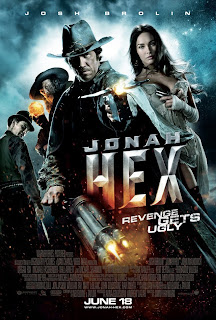 I have no idea what occurred behind the scenes of Jonah Hex, beyond the broad strokes that have been reported. But I do know that the final product is barely a shell of a film, a barely functioning picture that makes it to feature length only through repeated scenes and random thematic detours. At just 73 minutes long without end credits, it is the shortest live-action film I have ever seen in a theater. Heck, many of Warner Bros' direct-to-DVD DC Comics animated features are longer. Like past films that were heavily-tinkered to no avail in post-production, there is just enough of a kernel of substance and thought to make one mourn the final cut. The failure of Jonah Hex is not a cause for gloating or mockery. It is a tragedy.

A token amount of plot - The Civil War is over, and America is on the precipice of celebrating 100 years of nationhood. However, the embittered Confederate officer Quinten Turnbell (John Malkovich) has plans to launch a horrifying terrorist attack on our nation's centennial, in the hopes that the people will turn against a government that failed to protect them from mass murder. President Grant (Aidan Quinn) has no choice but to track down Jonah Hex (Josh Brolin), the nomad bounty hunter who once served under Turnbell. Long ago, at the close of the war, Turnbell blamed Hex for the death of his son and took bloody revenge, killing Hex's family and scarring him for life. Can Hex track down his hated enemy and settle a score before Turnbell unleashes Hell on American soil?

There is a framework for a solid western here, and one wonders what became of the original screenplay by Mark Neveldine and Brian Taylor (Crank, Gamer). The film is briefly successful at establishing tone, with Hex's comedic violence (including a very Crank-like moment when Hex shoots an attacker who falls right back into the coffin where he was hiding) contrasted by Turnbell's grisly rampage. PG-13 aside, this is a startlingly violent film, with innocent civilians being massacred wholesale throughout. Whether or not Neveldine and Taylor intended Malkovich's homegrown terrorist as a parable to Timothy McVeigh or our worst fears about the most fringe members of the Tea Party movement (a first-act attack involves domestic suicide bombers), the film's surprising 'what-if?' topicality gives it more weight than it probably deserves. At face value, the core arc of the film involves bitter anti-government loner Jonah Hex confronting an extremist version of himself, someone who's anti-government outrage has allowed himself to justify the slaughter of innocents. The one almost-great scene in the film has Hex using his hastily-explained ability to talk to the dead to converse with Turnbell's dead son, Hex's best friend who he killed in order to stop Turnbell from committing war crimes. For better or worse, the film never forgets Hex's and Turnbell's connection to each other.

But that's about all the good will the movie has to offer, as the finished product is a rushed, choppy, repetitive, and often soulless mess of a movie. The only person who emerges unscathed is ironically Megan Fox, as her glorified-cameo has so little substance (she progresses in her three main scenes from love interest to hostage to action sidekick) that once again we are unable to tell what she can do when given a solid script and competent direction. Josh Brolin does what he can, but his job is basically to scowl under his disfiguring makeup while occasionally shooting someone. John Malkovich looks lost and annoyed, as his southern accent comes and goes at will and the script fails to give him more than a few lines at a time. Everyone else (Will Arnett, Aidan Quinn, Michael Shannon, Wes Bentley, Michael Fassbinder) shows up for a scene or two and barely registers beyond the expository level. Lance Riddick has one fun scene as Hex's weapons dealer, as he is the token black friend who explains the heroic Jonah Hex's reasons for fighting in the Confederacy.

As far as the action goes, it's mostly cut in a tight and quick fashion, although it only goes overboard during the climactic showdown. Most of the beats simply involve Hex walking in a straight line and shooting bad guys, although he shoots a lot of them. Again, save for a lack of blood and gore, this feels like an R-rated picture through and through. I'd imagine only the period setting saved the PG-13 as only Vantage Point had close to this level of carnage in a present-day setting (how that one avoided an R, I'll never know). Alas, prurient fans of Ms. Fox or Mr. Brolin should know that there is no sexual content or nudity, so you'll have to get your full-frontal Malkovich elsewhere (The Sheltering Sky?). For what little it's worth, those only going to watch Jonah Hex kill a few dozen people will get their money's worth.

The film itself is a structural disaster, as it jumps from one stand-alone scene to another in the first half, before turning into a wave of repeated scenes (Hex's origin is told in full twice), unnecessary voice-over, montages of Hex riding to his next destination set to heavy-metal music, and a weird left-turn into pure mysticism, as a near-death Hex encounters Turnbell in a dream state and does battle with him (this is beyond pointless the first time, but its inclusion in the real-world finale kills the flow of the final battle). Odd as it sounds, the 73-minute picture feels padded, as if the usable footage wouldn't make for a full-length feature.

In the end, Jonah Hex is a missed opportunity. It is just the kind of thing Warner Bros should be making, a cheaper comic book film starring a B-level DC character. It is a custom-made role for Josh Brolin, and the idea of John Malkovich as a crazed Confederate super villain seems to write itself. Still, with an entire film's worth of footage left on the cutting room floor, the action rendered choppy and occasionally unwatchable (due to editing for that PG-13?), and a cavalcade of notable performers regulated to character-less cameos, the film is simply a mess of historical proportions. That the film contains smart and topical ideas does not make the film smart. The rumors are true, Jonah Hex is butchered mess, nearly as ugly as the man himself.

Jonah Hex is pretty straight in it's prevarication. Jonah Hex witnessed his family die at the keeping of Evangel Turnbull. Unfortunately, for Hex, Turnbull died mysteriously in a hotel dismiss...or did he. Turns out Tunrbull is relieve vital and a danger to the US. Now, Prophet moldiness get his penalise and reserve the US.