And my favorite film of the decade is... 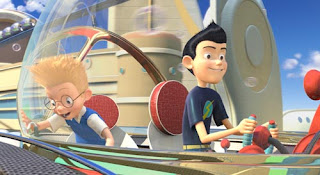 A full list will come later in the month. Granted, by some fluke if Avatar or Sherlock Holmes end up being my absolute favorite film of this decade, then some revisions may be in order, but let's presume that they just end up being really, really good. As I look at my list of favorites over the 2000s, I find it filled with movies that were warm and celebrated unexpected goodness, good deeds in a weary world to quote a famous chocolate maker. There was certainly a place for masterpieces of cynicism and despair (Frailty, The Prestige, The Pledge), but I found myself more impressed by those films that could wring emotion out of light rather than darkness. Be it the unwavering friendship of Sam as his friend Frodo descends into madness on their quest to dispose of a cursed ring, young Akeelah remembering all of the people in her life that helped her train for the spelling bee, or Penny Lane tricking Russell Hammond into visiting the home of the young journalist he betrayed so that he might make amends, the moments that stood out were the ones that celebrated surprising decency.

My choice for my favorite film of the decade may not be the best film of the 2000s. Heck, it’s probably not the best animated film of the past ten years. But it’s one of those movies that I probably love more than anyone else on the planet, which perhaps only makes me love it more. I have never been so surprised by and overjoyed with a film like I was following my first viewing of Meet the Robinsons. The under-the-radar Disney film, about an orphaned young scientist who travels into the future and meets the surrogate family he could only dream of, is constantly clever, often hilarious, and unabashedly emotional. I distinctly remember walking out of the press screening, my eyes more than a little watery, and immediately calling my wife to inform her that I had just wasted a Wednesday afternoon. I had just seen something truly special and she was going to have to accompany me for a repeat viewing as soon as possible. The heartbreaking initial act, the goofy but human futuristic family, the mobster-frogs, the way that the deliciously villainous Bowler Hat Guy becomes the most sympathetic figure in the film, the stunningly powerful and completely earned happy ending… everything about this unassuming picture is just magical. To paraphrase another classic of this decade, Meet the Robinsons is a movie I love so much that it hurts.

Well, at least your choice is original.

I recently watched Meet The Robinsons on cable and I was expecting the worst, but instead I was surprised. Even if it has its flaws, the film was enjoyable. Those frogs deserve its own spin-off. The message of the film is worth spreading:

I have to agree with you. I actually saw Meet the Robinsons three times in the theater. Once with my friend, then I just had to take my husband, then I had to take my mother. I love it. Show it to my movie club at school every year. One day my little girl will be old enough to share it with me and I will watch it again with her, too. :)

I have to say, everyone I've talked to who's seen this film didn't like it - but I did. It's a lovely, well-crafted (and really good-looking!) movie about family, and the characters are so interesting. I always wondered why it didn't get better press.