Review: Snowmen (2011) is a lightweight family film that doesn't pander to its young audience and deals frankly with mortality. 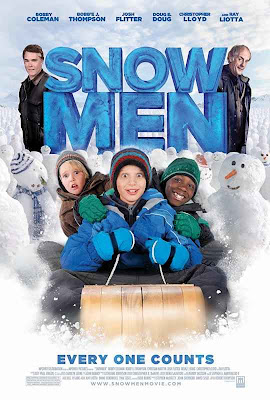 When I was quite a bit younger, I was always impressed by family films and/or kid-pics that acknowledged harsh truths of life and/or dealt frankly with darker subject matters.  Of course, in today's marketplace, what we consider 'kids films' are basically the same PG-13 rated blockbusters that everyone else sees and/or the mass-market PG-rated animated pictures that attempt to entertain adults and kids at the same time.  Since there are fewer and fewer big-studio films made for adults, it stands to reason that there is less of a need for explicitly kid-friendly movies of this nature.  Nonetheless, if you have young kids and want some middle ground between Cars 2 and Transformers: Dark of the Moon, Snowmen will likely fit the bill.  It is a throwback of sorts to the kind of movie that seemed tailor-made to be screened in elementary schools during 'movie day'.  It is a product of an age where kids still needed movies that were appropriate for them and didn't always have to talk down to them.

The plot, slight as it is, concerns the plight of young Billy Kirkfield (Bobby Coleman), a young boy who has been suffering from a reoccurring cancer for several years.  After overhearing word from his doctor that his health is not improving, Billy sets out on a quest of sorts to give his life some meaning in the time he thinks he has left (he wants, to paraphrase Roger from Rent, 'one great song before he dies').  Spurred on the local media coverage when Billy and his friends discover a frozen corpse in their backyard, Billy sets out to set a record, any record, that will get him into the Guinness Book of World Records.  Billy quickly settles on setting a new mark for the most amount of snowmen built at one time, and thus the proverbial clock is set.

While the film is less overtly morose than something like One Last Thing, the picture never shies away from the reality that Billy may not have much time left.  His father, Reggie Kirkfield (a fine Ray Liotta) slowly realizes that he has been playing the role of the obsessively positive patriarch not for Billy's sake, but for his own, while Billy's friends are relatively casual about their friend's condition.  Aside from the obvious undertones that exist, the film works as a relatively amusing, if occasionally generic coming-of-age story (confrontation with bullies, dealing with first crushes, etc).  At its core, writer/director Robert Kirbyson's obvious labor of love comes off like a toned-down, somewhat more realistic variation on Mark Steven Johnson's often fantastical Simon Birch.  To its credit, it does contain a glorified cameo from Christopher Lloyd in a wonderful scene which contains the actor's best theatrical role since, I dunno, Angels in the Outfield.

Snowmen is a simple pleasure, an unpretentious and generally charming kids' film that will remind you of the kind of stuff that your parents used to force you to watch instead of letting you watch Robocop or Silence of the Lambs.  It is unapologetic about its subject matter and only occasionally goes for the easy emotional beat.  It earns points for not pandering to its younger audience members, as well as kudos for not drowning in time-sensitive pop-culture references (as such, the film has a timeless quality that will serve it well).  It has simple and small-scale goals and achieves all of them with a token amount of class.  Come what may, Snowmen is a fun little movie for an audience that no longer has films made specifically for them.