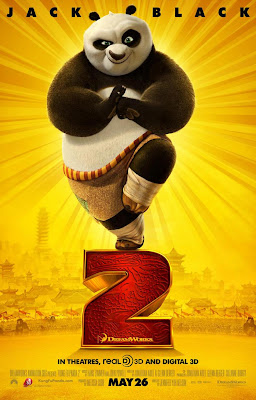 Kung Fu Panda 2 is a textbook example of how to do a sequel right.  It remembers that it is a second chapter and allows the characters to grow and change accordingly.  It does not make the main characters learn the same lesson for the second time, but rather gives them new obstacles and arcs to overcome.  It goes bigger but remembers to be better at the same time, and it carefully lays the groundwork for whatever might come next while succeeding as a stand-alone picture.  It is a laugh-out loud comedy, a thoughtful character drama, and a spectacular adventure.  Regardless of genre and regardless of its aspirations as kid-friendly entertainment, it isn't just a great cartoon, but a great film.

A token amount of plot: Po (Jack Black) has proven himself as the true Dragon Warrior and has taken his rightful place alongside the Furious Five.  But a new threat emerges in the form of Lord Shen (Gary Oldman), who wishes to take over China with the help of his new ultimate weapon (basically a giant cannon ball).  But as Po and the gang confront this new menace, Po is shocked to realize that Shen actually has ties to Po's past.  As Po attempts to piece together fragments of his forgotten childhood, Lord Shen makes his move against China fully aware that the mythical Dragon Warrior may be the only one who can stop him.

What works best in this picture is the sense that these characters remember that they lived through the first film.  Po and Shifu (Dustin Hoffman) share a deep friendship and a mutual respect, while Po no longer has to prove himself to the Furious Five. While Po spent much of the first film as a pratfalling clown, here he is a confident warrior to be reckoned with, and as a result the comedy is far more low-key and successful.  Most of the comedy is merely gentle mockery of action-film cliches, such as a climactic moment where Po makes a triumphant speech from a hilltop unaware that no one can hear him.  Because the humor is more ingrained within the action and drama, it is that much funnier.

Po's crisis in this film is not one of skill or self-confidence, but one of identity and family legacy.  In the first film Po had to discover what he is.  In this picture, he must discover who he is and how that defines him as a warrior, as a son, and as a friend.  Jack Black has most of the emotional heavy lifting to do this time around (in the first film, it was Dustin Hoffman who had the emotional arc), and he does not disappoint.  Say what you will about his mugging tendencies as a live-action actor, but animation suits him perfectly, allowing him to tone down his shtick and let the artwork be larger than life instead.  Po will likely go down as Jack Black's best and most interesting character.

Of the rest of the cast, Gary Oldman and James Hong shine brightest.  Hoffman has much less screentime compared to the first film, but he does make the most of it.  James Hong, a certified national treasure, continues to shine as Po's adopted father and his relationship with Po is what gives the movie its beating heart.  As evidenced in the first film, this film, and even in the terrific Thanksgiving TV special from last November, the long-term story is going to be one of the constant conflict between being a responsible adult and being there for your family, and Hong makes us care about that genuine conflict.

Gary Oldman plays the villain of the piece, and like the first picture, his murderous antagonist is given a compelling back story that involves loved ones trying and failing to stop a young man's descent into evil.  The first film's villain brought to mind Anakin Skywalker (a flawed pupil whose teachers couldn't control him).  Lord Shen feels modeled after the likes of Kip Kinkel, as his Shen's parents tried and failed to tame his darkness and then were forced to lock him away when his actions surpassed even their worst fears.  In the present, Shen's arc is a darker variation on the Bowler Hat Guy from Meet the Robinsons.  It's unblinkingly thoughtful material for a family-friendly cartoon, but Oldman's character work pays off in the end.

The rest of the cast frankly doesn't get all that much to do.  Like the first film, the Furious Five is basically regulated to Po's back up crew, and Angelina Jolie gets the lion-share of dialogue amongst them.  Jean Claude Van Damme and Dennis Haysbert have brief cameos as imprisoned lords who believe that surrender is the better choice when fighting back may mean the slaughter of their people.  Shen has a surprisingly layered relationship with a Soothesayer, played with grace by Michelle Yeoh.  While not every character gets their moment to shine, they all work flawlessly as an ensemble cast, which provides the emotional oomph to the stunning action sequences.  There is a moment towards the end where we realize what a strong ensemble this series has created, and there is plenty of room to develop these characters in later chapters.

If the film has a flaw, it is that there is almost too much action (there are around three false endings).  But nearly every set piece scores in a visceral and narrative sense.  While the first film was an origin story that had only a handful of combat sequences, the sequel is a full-blown action picture.  The various fights, chases, and genuinely epic confrontations are all gloriously well-choreographed and staged, with a full sense of space and time throughout, plus emotional stakes that make them matter.  There is no need to spoil the various set-pieces, only to say that they are so visually dynamic that I'd almost recommend seeing it in 3D.

Oh yes, about that whole 3D-conundrum.  Dreamworks made it trickier for you this time.  Let me put it this way: The film will surely work just as well in 2D, but if you're inclined to splurge, you'll get your money's worth seeing Kung Fu Panda 2 in 3D (or IMAX 3D).  Even my wife, who loathes 3D as a matter of principle, was impressed by the high-flying effects work on display.  The animation is, per usual, eye-poppingly gorgeous, and the cityscapes and mountain tops look three-dimensional with or without the glasses.  There are several flashbacks in the picture, and nearly every one uses a different animation style and visual look (the opening prologue is basically a Chinese shadow puppet show), which works both stylistically and narratively.  This is a simply gorgeous-looking motion picture from beginning to end.

Jennifer Yuh Nelson's Kung Fu Panda 2 is a truly beautiful film in every way.  It is a visually dynamic adventure story, with low-key comedy that enhances the inherently sober drama.  The dynamic and exciting action sequences will likely rank among the year's best.  Jack Black and Gary Oldman play well off of each other, while Dustin Hoffman, James Hong, and Michelle Yeoh bring genuine class to the proceedings.  It is thoughtful, moving, and endlessly entertaining.  It is a textbook example of how to do a sequel that broadens the world while keeping the core mythology intact.  Jeffrey Katzenberg has claimed that he wants six Kung Fu Panda films.  If this first sequel is any indication, Yuh and her storytelling crew know exactly what they are doing and where they are going with this story.  Kung Fu Panda 2 is a terrific stand-alone film and a taking-off point for what could be a wonderful animated fable.

It's so great to hear your love for this film. The first film was a great surprise for me (much like Emperor's New Groove) and the trailers didn't lift my hopes that this sequel could bring what the first film brought. This has done much to assuage my fears

The Fatal Five is actually the Furious Five.

Great review. Looking forward to this movie. Loved the first one.

Fixed, thanks. I think I made the same error three years ago and went off of that. Whoops.

Scott, the fifth paragraph should probably start with Dustin Hoffman's name instead of Gary Oldman. Other than that, great review! I was quite surprised by how much I liked the first one, so with this sort of praise from a trusted source (thats you!), I think I will plan on going to see it soon!

oops. never mind... I guess I read it wrong since you dont go on to discuss Oldman until the next paragraph, but you do talk about Dustin Hoffman...

I was dying of laughter at the Chinese paper Dragon scene. It was one of the funniest parts to me! This was a great movie for adults and children alike. I wasn’t excited to see it at first, but since my kids forced me to see it with them. I saw how great it was! I am not a big fan of Jack Black, but he was great as the voice of Po in both movies. Without a doubt, I will be seeing this movie once again soon with my Blockbuster Movie Pass! In addition to being able to rent DVDs and Blu-Rays my mail or in the store, the Blockbuster Movie Pass lets me stream movies and shows to my TV and computer. Even if I didn’t work for DISH, I would still have to have the $10 per month Blockbuster Movie Pass. It’s that good!