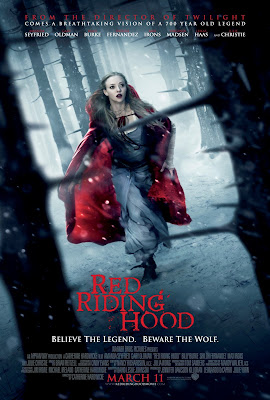 Catherine Hardwicke’s Red Riding Hood is a picture that works in spite of itself. Much of the acting is overly formal and stilted, the film looks claustrophobic and stage bound, and the narrative flirts with societal relevance but discards it at every opportunity. But the movie has its pulpy charms and a terrifically entertaining star-turn by Gary Oldman. It is not high art, and it suffers from a PG-13 that dampens the grisly violence and periodic sexuality, but it’s rarely boring and often genuinely amusing.

The plot is pretty simple. Young Valerie (Amanda Seyfried) is betrothed to Henry (Max Irons), but her heart belongs to her childhood sweetheart Peter (Shiloh Fernandez). But her relationship issues quickly take a backseat when her sister is murdered by the werewolf that has haunted their small village for generations. Fearing a supernatural predator, Father Auguste (Lucas Haas) calls in a traveling werewolf-killer known only as Solomon (Gary Oldman). As the wolf continues to shed human blood, Valerie discovers shocking family secrets that put her mother (Virgina Madsen), father (Billy Burke), and grandmother (Julie Christie) in mortal danger. Does Valerie have a connection to the werewolf? Is it one of her two would-be lovers, someone else from the town, or is there another explanation entirely?

On a visual front, this is a highly claustrophobic motion picture, with gratuitous aerial panning shots giving way to a cluttered and crowded small-town that feels like it was all shot on a couple sound stages. The whole film feels genuinely stage-bound, which when coupled with the overly formal dialogue and acting, makes the picture feel like an off-Broadway theater production (only during the village festival does the film truly breathe onscreen). While there are moments of action and violence, they are all rather muted by the PG-13. Come what may, this is a film that begs for an R-rating, both for full-on werewolf gore and for the ability to play with the sexual themes that director Hardwicke and writer David Johnson seem afraid of bringing to the surface. Still, it remains a violent picture with a decent-sized body count. It is certainly more potent than the various Screen Gems horror films that seem aimed at the tween audience.

To the picture’s credit, the romantic triangle is developed with a bare minimum of melodrama. Both the wealthy and proper Henry and the poor and more ‘deviant’ Peter are decent and thoughtful young men, and the subplot is actually resolved in a timely and realistic manner. Of course, the film is more about discovering who or what is terrorizing the village than whether or not Valerie will choose security versus love. As a result, the film is quite tame when it comes to its sexuality, both in content and would-be symbolism. A chaste second-act dance between Seyfried and another young woman is as risqué as it gets. Whether hampered by the PG-13 or not, Hardwicke seems to know full-well that other films have played on the ‘Red Riding Hood vs. Big Bad Wolf as a metaphor for forbidden/burgeoning sexuality (if not rape fantasy)’, so she perhaps wisely avoids spending too much time in the terrain that Hard Candy and Freeway among others have played in before.

Of course, the somewhat muted sexual maturity leaves the film without much of a character arc for our heroine, as the opening act’s token nods to Valerie’s 'inner-bad girl' have no real payoff. Seyfried, like pretty much the entire cast, struggles to create a three-dimensional character amidst the somewhat on-the-nose dialogue, and she especially is burdened with yet another case of needlessly expository voice over. But those around her fare little better, as Virginia Madsen and Julie Christie are basically wasted and Lucas Haas is given next-to-nothing to do. Billy Burke gets a couple humorous moments, but they only serve to remind us how warm and witty he is as Bella’s father in the Twilight Saga. Oh, and while plenty of critics will go out of their way to compare this film to Twilight, it actually feels more like a cinematic cousin of The Wolfman and Sleepy Hollow.

On the acting front, the one saving grace is the full-on scenery-chewing delight that is Gary Oldman. He shows up towards the end of act one and gives the movie a genuine shot-in-the-arm. It may not be great acting, but Oldman gives such gusto and seems to have such a grand time that we can’t help but smile. His Solomon is three little piggies-worth of honey baked ham, and it tastes good. And the film improves overall when the focus shifts away from Valerie’s matters of the heart towards more of a gothic horror tale. The film makes a stab at modern-day political relevance, with Solomon’s torturous interrogative methods yielding nothing but further death. But the picture fashions Solomon as less of a modern-day ‘enhanced interrogator’ than a Captain Ahab whose obsessive quest to dispatch werewolves yields a bitter price. Like the repressed female sexuality angle that comes and goes in the first act, the religious and political parables aren’t fully developed.

Red Riding Hood is not what I would call a ‘good’ movie, but it is an entertaining genre entry. It has an occasionally gripping narrative and a terrifically fun Gary Oldman performance that takes over much of the picture right when it needs an extra jolt. It remains a somewhat toothless and visually cluttered piece of work, but there are pleasures to be had. Point being, if you actually want to see Red Riding Hood, you’ll probably enjoy it.