2010 in Review: The Underrated

Let us continue our look back at the year in film with a token acknowledgement of ten films that were not quite as bad as their critical reputations. For the record, not all of the films below are good pictures. In a film criticism world that follows the sensationalized political landscape more and more, films are often judged as either unqualified masterpieces or pure failures. We have lost the ability to acknowledge that some films are just 'good', 'okay', or 'not that bad'. The following are in alphabetical order. 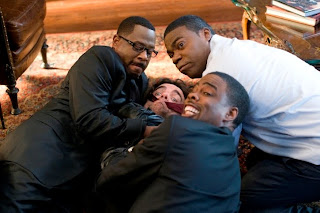 Death at a Funeral
This Neil LaBute comedy got hammered for daring to remake a seemingly untouchable 2007 Frank Oz picture, all while critics couldn't decide if said original was any good in the first place. I have not seen the original, but this American variation works as a genuinely funny family comedy. Chris Rock makes an excellent and sympathetic straight man, James Mardsen is a fine clown, Zoe Saldana looks dynamite while getting to be funny, and the cast is filled with notable character actors (Loretta Devine, Keith David, Danny Glover) who just happen to be African-American. The first third is sharper than the rest, but it's a consistently entertaining piece of filmmaking.

Edge of Darkness
Pundits and critics spent most of their time hand-wringing over the personal flaws of star Mel Gibson, while audiences were conned by an ad campaign that made the film seem like a sequel to Taken. In reality, Martin Campbell's remake of his own 1985 BBC miniseries is a character-driven portrait of crippling grief and the pursuit of vengeance as a last resort to give weight to an otherwise meaningless life. Gibson and Ray Winstone give wonderfully sharp and low-key star turns, and Campbell does what he does best. He makes the thriller conventions feel real by having its adult characters act like adults and react realistically to the treachery and violence around them. 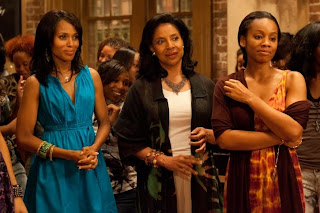 For Colored Girls
Had this film been directed by someone less of a rosarch test than Tyler Perry, most of us would have just welcomed the all-star cast of underemployed African-American females being allowed to chew on meaty roles from the 1975 play. Yes, what was likely intended as Tyler Perry's Schindler's List ended up closer to his Amistad. But there is real power to the acting and the melodrama isn't nearly as heated as you'd expect. Perry's decision to frame Ntozake Shange's monologues as the equivalent of musical numbers is a surprisingly canny one, and the film remains compulsively watchable. It's not the masterpiece that all were hoping, but it's a rock-solid piece of the kind of thing we see all too infrequently from major studio releases. 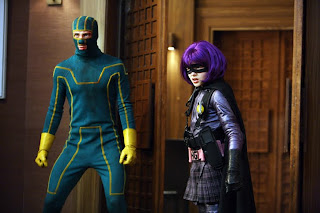 Kick-Ass
Call this one 'underrated by me'. I gave the film a 'B' upon its release, saying that the film couldn't decide whether to be a full-on deconstruction of superhero mythology or a campy action blast set in a quasi-real world. That remains true, but much of my complaints came from the insanely over-the-top action scenes featuring Hit Girl. Well, come what may, if you watch the Blu Ray bonus features, you realize just how much of that action was in fact done more-or-less for in real time. Since I've seen Chloe Moretz doing those stunts for real, it's that much easier to believe my eyes when I see the film, thus making the contrast between the failed heroism of Kick-Assand the crowd-pleasing vigilantism of Hit Girl less of an issue. 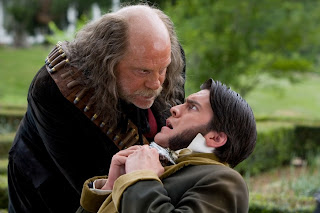 Jonah Hex
Thus brings us the first film on this list that qualifies as 'bad'. While you won't find me calling the film some unheralded masterpiece, there are a few notable ideas that were missed in the rush to trash the obviously-butchered 73-minute theatrical adaptation of this cult comic book (and criticize innocent bystander Megan Fox for what amounted to a glorified cameo). The film has a mournful tone, and the picture uses the discontent of defeated Confederate soldiers as a parable to those on the political Right who feel so disenfranchised that they've considered taking up arms and/or doing violence against their government and their countrymen. The sight of John Malkovich deploying suicide bombers and weapons of mass destruction in the wholesale slaughter of innocent civilians to spur the populace to rise up against the government is a chilling one that brings to mind all of the worst fears of a truly militant 'Tea Party'. Not a good movie, but an interesting bad movie. 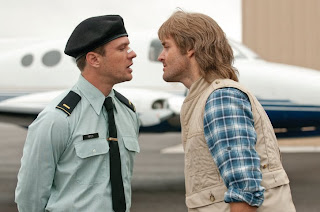 MacGruber
The run-up to theatrical release was an odd one. The marketing campaign debuted with a genuinely funny trailer, and then Rogue/Universal screened the film at the SXSW Film Festival to rave reviews. Then the studio proceeded to hide the film until the last minute from regular critics, creating an automatic negative response that often greets films that are hidden from critics. It's no comedy classic, and it suffers from the same problems as the Austin Powers sequels (it presumes that MacGruber by himself is a funny character). But the supporting cast (Val Kilmer, Powers Boothe, Maya Rudolph, etc) score pretty consistently, Will Forte, Ryan Phillipe, and Kristen Wiig are good sports, and the film contains several hard belly laughs and some genuinely shocking bawdy humor. To call MacGruber the best Saturday Night Live movie since Wayne's World 2 probably isn't saying much, but it's a genuinely witty comedy and well-worth a rental. 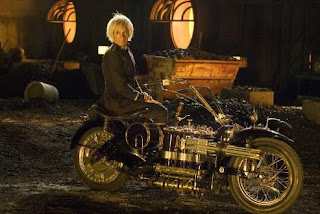 The Nutcracker 3D
This is another 'not good' film that made the list. I saw this one at a press screening way back in October, but was required not to publish any reviews until right before opening day. The reason has less to do with the film's quality (it's ambitious but middling and plodding) and more to do with the fact that the beloved childrens' story had been turned into a Holocaust parable. The problem is that most of the universally scathing reviews concentrated on the shock and outrage that the filmmakers DARE try such an idea, as opposed to whether or not the film worked on its own merits. As Roger Ebert (who also trashed the film) likes to say, "It's not what it's about, but how it's about it." The film cost $90 million and has yet to gross $300,000 worldwide, making it perhaps the biggest flop of all-time. Come what may, it didn't deserve that. It may have been deeply flawed and not entirely successful, but this ambitious and obvious labor-of-love Nutcracker had genuine balls. 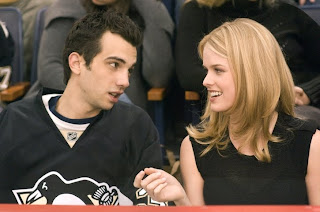 She's Out of My League
There seems to be a trend of late of critiquing every modern-day comedy about young adults as if its a sequel to Judd Apatow's last picture. We are so used to the template (aimless young men swearing at each other while pursuing an unattainable hottie) that most of us missed the genuine intelligence at play in this charming little romantic comedy. Jay Baruchel, as a nerdy young man who lucks out into a relationship with Alice Eve, is a kind and decent man who's main issues stem from his somewhat smothering family. Alice Eve's 'perfect 10' is allowed to have a genuine personality and a character arc of her own. The film contains genuine insights about relationships and family pressure, the characters are surprisingly honest with each other, and the picture doesn't have a mean bone in its entire body. Warts and all, it operates as a subtler and low more-key variation on Scott Pilgrim Vs. the World, but one where we actually root for the male lead and the female lead doesn't need rescuing. 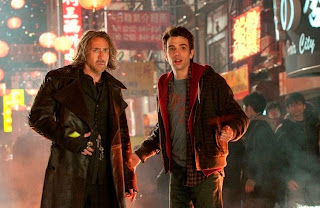 The Sorcerer's Apprentice
From a critical standpoint, Disney's live-action department did not have a good year (When In Rome, Prince of Persia, Tron: Legacy, Alice in Wonderland). Tis a pity then that the one would-be franchise launcher that exhibited genuine wit and imagination is the one that crashed hardest at the box office. The film's biggest burden is its $150 million budget, as this light and character-driven story doesn't merit the blockbuster spending. Nicolas Cage does 'low-key weird' and Jay Baruchel again plays an intelligent and sympathetic nerd. What makes this film work is the quality of the dialogue and the character interaction. From Baruchel's low-key romance with Theresa Palmer to Cage's bitchy feud with villain Alfred Molina, to Molina's own condescending relationship with his own apprentice Toby Kebell (as a would-be David Blaine who happens to be an evil sorcerer), the most special effects in this quirky little gem is the genuinely funny interplay between friends and foes. Plus, in the era of 'to be continued in the next two sequels', it was beyond refreshing to see a fantasy film with a beginning, middle, and end. All that, plus a laugh-out-loud Star Wars joke to boot. 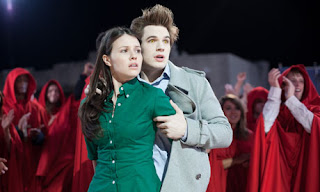 Vampires Suck
Say what? Don't the films of Jason Friedberg and Aaron Seltzer usually make the 'worst-of-the-year' list? Normally the minds behind Disaster Movie, Meet the Spartans, and Date Movie are an insult to the genre of satire. And, let's be clear, Vampires Suck is not anywhere near as funny as the Zucker-Abrahams-Zucker classics of the 1980s, or even the higher-end satires of late like Superhero Movie, Walk Hard, and The Comebacks. But there is a token growth in their newest would-be comedy. The focus on one specific and highly spoof-able franchise creates something almost resembling discipline. The random pop-culture references are far fewer in number, Jenn Proske nails the self-aggrandizing 'look at my woe' shtick of Bella Swan, and Diedrich Bader scores real laughs as the concerned patriarch. It might not be saying much to proclaim that Friedberg and Seltzer have achieved a whole 'C-' this time around. But if we don't acknowledge when progress is made, then we cannot complain when they fall back into their old pit of utter failure the next time around.
And that's it for our look at the year in underrated films. Feel free to clog the comment boards telling me how right or wrong I am. Next up (when my schedule allows) are the ten 'good movies you missed', followed by the worst and best of the year. If time permits, I'll toss in a few extras between now and the year's end.
Scott Mendelson
Posted by Scott Mendelson at 3:08 PM