The action films didn't get smaller, we just got older. 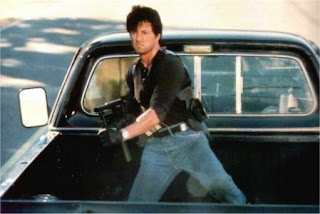 I liked The Expendables as what it was: a B-movie action picture that wouldn't be under nearly this much scrutiny if the genre weren't such an endangered species. Is it an action classic that restores the macho he-man action film as a viable genre? Not in the least. But it's good dumb violent fun that's worth the $6 for a couple hours, which is all these movies ever were. We lionize the action pictures of our youth while neglecting to realize that they weren't all that good back in the day. Viewed without nostalgia, was Commando really all that good? We may pine for the 'glory days' of Red Heat, Cobra, Toy Soldiers, or The Delta Force, but we're simply trying to recapture our lost youth. We love those movies because we loved being young enough to enjoy them without irony.

We forget that Arnold Schwarzenegger didn't become a mega star until he started making Ivan Reitman comedies and big-budget sci-fi vehicles. We forget that Sylvester Stallone only really had big box office successes with the Rambo and Rocky films until his brief 1993-1997 comeback. We forget that Chuck Norris made exactly one good film (Code of Silence) and that he was a self-parody even before his seven-year stint on Walker: Texas Ranger. We don't realize that much of Jean Claude Van Damme's direct-to-DVD output (such as Replicant) is actually equal if not occasionally superior to his theatrical filmography. To quote Billy Joel, the good old days, they weren't always good, and tomorrow ain't as bad as it seems.

Posted by Scott Mendelson at 3:45 PM