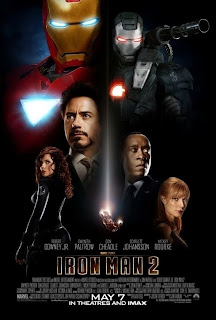 I wasn't the world's biggest fan of the first Iron Man picture, but I admired its intentions. Warts and all, it was an attempt to set a comic book action film in the real world, with adult characters acting somewhat like grownups and engaging in behavior that had semi-plausible political and social consequences. Male escapist fantasy or not, the picture was anchored by a terrific performance by Robert Downey Jr. and seemed to have a genuine point of view regarding the military-industrial complex. Sure Tony Stark didn't change all that much by the end of the picture, and the third act basically tossed aside the ideas at play for a rock-em sock-em robots finale, but at least the first picture has made by grownups with adult sensibilities at its core. Alas, Iron Man 2 has abandoned all pretenses of social relevance, as it strips its characters and its world of all real-world renascence for the sake of crowd-pleasing gee-whiz adventure. It's not a boring film, and it certainly has moments of amusement and charm, but it's not a smart picture, and it seems aimed squarely at adolescents and their younger siblings.

A token amount of plot: Six months after revealing his secret identity to the world, Tony Stark has basically brought about world peace using his weaponized suit as a form of deterrence (alas, this fascinating idea is never explained or detailed). But the American government is concerned about one man having such unchecked power and is attempting to gain control of the technology for the US armed forces. Meanwhile, mad Russian scientist Ivan Vanko (Mickey Rourke) is on his way to seek vengeance against Tony for sins committed by the elder Stark against Ivan's father nearly forty years ago. As if that isn't enough to worry about, Stark may be on the cusp of death, as the reactor that keeps his heart beating and powers his Iron Man suit is quickly poisoning him.

The idea of Tony Stark having to face his family's sordid past while securing his own legacy is a promising one. But the crime at the heart of the story is not the Stark family's prior sins in weapons dealing, but a simple theft of technology. In fact, not one mention is made of Stark family past as 'merchants of death', and the late Howard Stark (John Slattery) comes off instead as a somewhat cold-hearted Walt Disney, a man who wanted to create the world of tomorrow while neglecting his only son. The complete omission of this seemingly vital component the Iron Man mythos is symbolic of the whole film's apparent attempt to sand off any rough edges for the sake of the youngest fans. Much of the picture has a toned-down campy feel to it, as even the few moments of genuine violence are undercut by slapstick and corny humor.

In fact, if the film has any precedent, it's Batman Forever. Like the 'lighter, more kid-friendly' Batman picture, this Iron Man picture has a bare minimum of violence and involves kooky and non-threatening villains teaming up purely to teach our hero a lesson in humility. Like that third Batman film, the initial villain is a vengeance-fueled psycho who is eventually coerced at the 50-minute mark into teaming up with a more cerebral villain (arms-merchant Justin Hammer, somewhat obnoxiously portrayed by Sam Rockwell) who envies and wants to be our hero. It centers on a hero dealing with dilemmas in duality ('can I be Tony Stark and Iron Man?') who must make some hard choices after an early attack by the initial antagonist results in collateral damage. As our hero descends further into personal torment, he is constantly confronted by a friend who eventually becomes a sidekick (Don Cheadle, taking over from Terrence Howard as James Rhodes). Oh, and there is also a brand-new costume assembled just in the nick of time for the climactic showdown.

The Schumacher blockbuster had a clear narrative journey for Bruce Wayne to compensate for its campier elements ('my parents' deaths were not my fault, so I can choose whether or not to be Batman'), as well as a terrifically slow-building performance by Jim Carrey. Iron Man 2 lacks a genuine journey for its hero and worthwhile villainy to match him up against. Mickey Rourke is barely in the picture and he barely speaks (95% of his dialogue is comprised of the monologue featured so heavily in the trailers). Sam Rockwell is not allowed to make any real impression beyond artificial smarm. Sure, his snarky resentment is slightly amusing, but that's pretty light stuff for the main villain for a superhero movie. Stark doesn't really learn anything or take proactive steps in order to triumph. The solution to most of his problems comes in the form of a deus ex machina delivered at the halfway mark by one Nick Fury. Alas, the idea of Samuel L. Jackson playing Nick Fury is more satisfying than watching him actually do the deed. Jackson has no real character to play and an inconstancy in tone that suggests either script-changes or a refusal to commit to a characterization that might conflict with future Marvel movies. Speaking of which, much of the second half of the picture is a glorified advertisement for The Avengers (a certain famous prop makes a fun and appropriate cameo appearance). The second and third acts of the movie basically boil down to 'Tony Stark must deal with his problems so he'll be ready to join the Avengers should the need arise'.

Tony Stark is, if anything, even more obnoxious this time around, and Downey Jr. provides little of the grounded charm that allowed the audience to tolerate his vices the last time around. Stark never really makes a choice to be a better person, in fact he never really makes any real choices at all beyond promoting Pepper Potts to CEO in the opening scenes. The arc of the film is basically 'Stark gets sick, Stark finds a cure, Stark is now happier and less of a schmuck from now on'. His only moments of amusement come in his scenes with Ms. Potts, as Gwyneth Paltrow greatly benefits from an increased role and her character's increased responsibilities at Stark Enterprises (she's no longer 'the girl' but a relevant and important supporting character). To the film's credit, the Stark/Potts relationship is more or less platonic for most of the film, and their banter and antagonistic genuine friendship is a highlight of the picture. Fairing less well is Scarlett Johansson as Stark's new personal assistant with a secret. She has a terrific action beat in the climax (the only solid one in the film), but she is otherwise around purely for eye candy.

As for the action sequences, there are only two full-blown set pieces. The film desperately needs a second-act action sequence between Ivan Vanko's attack in Monte Carlo and the climactic Iron Man vs. the robots climax (there is a brief slugfest between a drunken Stark and a righteously-indignant Rhodes at the hour mark, but it's mostly played for laughs). What action there is lacks any real tension or a sense of danger, as the film refuses to let the set-pieces play out without leavening humor (a briefly tense moment when the evil robots appear ready to target random civilians is defused when the robots settle on a young child, who we know darn-well will escape unharmed). And the climax itself is an endless whirl of one robot or another zooming past the camera before Iron Man or another robot zooms past us yet again. Even the much-anticipated team-up of Iron Man and War Machine is over before it begins, and the climactic smack-down against Vanko is done in a flash. Considering how little spectacle there is, it's a wonder that Paramount splurged for the IMAX screens, especially when the current occupant, Paramount's How to Train Your Dragon, puts the format to such better use.

All of the above flaws result in a complete loss of realism and gravitas that was established in the first picture. In this sequel, a single madman can attack an international car race with electric whips without any security presence to take him out. A secretly-villainous tycoon can loudly converse with a known murderer and use his name over the phone in front of a US senator. Said senator can be in cahoots with a businessman who ends up having ties to said terrorist without any real consequences. This type of sloppy plotting combined with no harm-no foul action is the sort of thing that usually finds itself into sillier comic book fare like Batman & Robin or Spider-Man 3. The original Iron Man at least attempted to be a character-driven political drama with comic book trappings. But Iron Man 2 dilutes the sense of purpose and becomes just another kid-friendly comic book adventure film. And, to be frank, it's not a very good one (it's no The Phantom, that's for sure).

On the money, Scott.