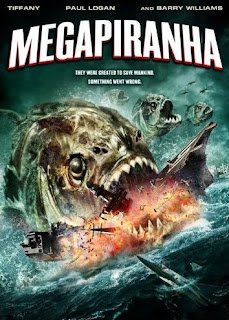 Mega Piranha is everything Mega Shark Vs. Giant Octopus wanted to be but wasn't. It is completely entertaining from start to finish. It has just enough of a budget and just enough production values to actually deliver the trashy goods. It is generally terrible, but never insulting and never dull. It is an absolute laugh riot because it achieves that delicate balancing act between taking its world seriously and acknowledging its absurdity. The film never cheats by winking at the audience, and it never seems to be trying to make a camp classic. The film premiered on the SyFy Channel last Saturday and comes to DVD on April 27th. While I would never call Mega Piranha 'good' by any reasonable artistic standard, it is the most fun I've had with a live-action movie all year.

A token amount of plot - Deep in the Amazon, good-gooder scientists led by Dr. Sara Monroe (80's pop-star Tiffany) have been experimenting on piranha for some poorly-explained attempted to enlarge the food supply. For reasons never actually explained, said fish escape (or are stolen?) and end up attacking various unlucky swimmers and boaters in the jungle and eventually on the beaches. After an American diplomat becomes fish-food, American Marine analyst Jason Fitch (Paul Logan) is sent in to investigate. He quickly realizes that the piranha are quickly growing in size and are swiftly making their way to the Florida coast. Can Logan and Dr. Monroe find a way to destroy these giant piranha before they eat their way into America, all while avoiding the murderous local government that believes that the fish are part of a US-backed political coup?

As always with movies like this, the difference is in the details. Everybody plays it relatively straight, since they are smart enough to realize that the situation is ridiculous enough. Pop-culture icons Tiffany and Barry Williams (as US military chief um... Bob Grady) do what they can not to embarrass themselves. They don't try to out-act the fish and they don't try to rise above the material. I wouldn't call it good acting, but they stay above water, if you'll pardon the pun. Special props go out to Paul Logan, who plays bad-ass analyst Jason Fitch as if he's some muscle-bound cross between Jason Bourne, Horatio Cane, and Jack Bauer (the film maintains its high energy level partially due being edited like a cheap episode of 24, minus the split-screen). Like Chris Klein in Street Fighter: The Legend of Chun Li, Logan throws himself into the stock hero role with all the gusto that likely went into such portrayals when he was playing in his backyard at the age of eight or nine. Whether randomly sneaking around secret areas with absolutely no stealth (dig the spying montage which has him randomly darting from side to side, rolling on the ground, and doing other 'sneaky' things guaranteed to attract unwanted attention), or engaging in hand-to-fin combat with giant piranhas on the beach, Logan single-handedly makes the film a whacked-out delight even when their are no mutant fish to be seen.

But, unlike some films involving creatures both mega and giant, writer/director Eric Forsberg's film gives us plenty of piranha in all shapes and sizes (the film involves both CGI and old-fashioned puppets). In a touch that will make fans of Night of the Lepus happy, there is absolutely no size consistency to the fish as they grow during the course of the picture. One minute they are as big as a house and crashing headfirst into buildings (which is, in intellectual critic-speak, fu%^$ing awesome!), the next minute we're being told that they'll soon be the size of a horse. But the important thing is that you see these terrifying death-dealing fish early and often. And while I would have liked to have seen more moments of individual people being eaten alive, you do get all kinds of city-wide carnage. For what it's worth, the film isn't nearly as bloody and gory as Mega Snake, which makes this more suitable for family viewing. I've always said that the key thing for C-level monster movies is to give the audience what the box promises them. You want mega piranhas eating and blowing up everything in sight? You get mega piranhas killing the heck out of each and every major location in the film.

Sure, there are plot holes (just how did the fish get loose in the first place?), character issues (at no point do any of the scientists express guilt over the thousands of people killed by their experiment), and logic issues (the final solution to destroy the fish doesn't make much sense), but you know that going into a movie like this. But the film delivers in spades exactly what is demanded from the genre. You get an absurd premise, several insane moments (man-to-fish kickboxing, a climax that evokes Thunderball with giant piranha), at least one unexpected and shocking death (during a time-out moment, ala Deep Blue Sea), characters that are entertaining during the non-horror scenes (Paul Logan is every bit as much fun as the main attraction), and unintentional laughs galore (a death scene for a random villain consists of the same two shots repeated about ten times). Most importantly, you get plenty hilarious scenes of giant fish killing people left and right.

I often talk about the various terrible horror films (Sleepaway Camp II and Sleepaway Camp III) and disaster porn (Mega Fault) that my wife forces me to watch. Well, put this in that rarest-of-rare categories of inexplicably great movies that my wife forced me to watch. While I would never call Mega Piranha a good film, it is completely successful at what it sets out to do. The scariest thing about it is that, in a year already featuring films by Tim Burton, Roman Polanski, Martin Campbell, and Martin Scorsese, Eric Forsberg's Mega Piranha is the most entertaining and enjoyable live-action movie I've seen this year.

A flick with a title like Mega Piranha has to be well crap but is it so crap it's actually really good? As a horror fan and B picture fan I will give this the once over for a laugh when it's released in the UK thanks for the heads up.

Perfectly critiqued! Amazingly, for all of the reasons that you'd think Mega Piranha would be unwatchable, it's truly addictive fun. Mega kudos to director Eric Forsberg, whose previous movies have also been campy, ridiculous fun.

I will give this the once over for a laugh when it's released in the UK thanks for the heads up.

I just bought the knockoff dvd in China and it has your first paragraph as the plot summary on the back cover.

I will give this the once over for a laugh when it's released in the UK thanks for the heads up.

Perfectly critiqued! Amazingly, for all of the reasons that you'd think Mega Piranha would be unwatchable, it's truly addictive fun. Mega kudos to director Eric Forsberg, whose previous movies have also been campy, ridiculous fun.

A flick with a title like Mega Piranha has to be well crap but is it so crap it's actually really good? As a horror fan and B picture fan I will give this the once over for a laugh when it's released in the UK thanks for the heads up.