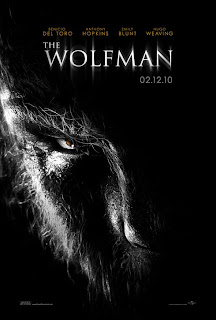 It is a rare thing when a big-budget genre picture can be accused of attempting to be too high-brow.  Generally speaking, an emphasis on character and plot over special effects usually results in a superior film.  But with a horror picture, you occasionally do have to deliver the horror goods.  Joe Johnston's The Wolfman fails on both grounds.  It feels hopelessly rushed in its initial acts, only to stop dead in its tracks in the final third.  The characters are barely sketched and most of their motivations are non-existent.  But, most importantly, the picture spends far more time watching cardboard characters walking in place, at the expense of the very thing we came to see: big-budget werewolf action.  It is one thing to leave them wanting more.  The Wolfman will have audiences leaving the theater wondering if they got anything at all.

A token amount of plot.  Long haunted by his father's distant behavior following his mother's suicide, acclaimed actor Lawrence Talbot (Benecio Del Toro) returns to his childhood London home following his brother's violent and unexplained murder.  Taking stock of local gossip involving some kind of semi-human creature of the night, Talbot swears to his brother's fiancee (Emily Blunt) that he will not leave until he discovers the truth, even as his father (Anthony Hopkins) seems ever more distant.  As famed Inspector Frederick Abberline (Hugo Weaving) arrives to investigate the recent violence, a clue leads Talbot to a local gypsy enclave and straight into the horrifying truth.

For better or worse, The Wolfman will likely remind viewers of Ang Lee's Hulk.  Like Lee's noble failure of a comic book drama, the film spends an obscene amount of time on a twisted father/son dynamic, and not enough time with actual werewolf terror.  While Eric Bana's Bruce Banner eventually hulked-out on several occasions as the film progressed (Hulk is nearly forty-minutes longer than The Wolfman), there was a complete lack of suspense as the picture immediately established that the Hulk was not a danger to humanity (IE - he wasn't going to kill anyone).  The Wolfman does not have that specific problem.  Without going into spoilers, the film very much earns its R-rating.  The main flaw is that there isn't nearly enough wolf action.  After a very brief opening teaser and a terrific sequence detailing an attack on a gypsy village, the picture grinds to a halt and the 30 days between full moons seems to unfold in real time.  But the remaining action beats in the last half of the picture are frustratingly brief and almost entirely confined to the second act.  To put it bluntly, you can leave the theater after the second major chase sequence (around the 65-minute mark), walk back in during the final five minutes and not miss a thing of consequence.

So, what's wrong with an emphasis on character and plot as opposed to special effects (CGI and practical)?  Well, that only works if the characters are engaging and the plot is compelling.  The plot is bare-bones and the only real plot twist is telegraphed from the beginning and revealed within the first hour.  The characters are equally threadbare and only Hopkins and Hugo Weavings' scenery chewing provide any real entertainment (even Weaving gets only a single entertaining scene).  Del Toro and Blunt act bored, because they probably are (Emily Blunt is forced to play the very definition of a token love-interest).  The characters wasn't interesting because we were constantly being TOLD who these people were rather than shown.  It's no secret that the film has had a tumultuous post-production (it was re-edited several times and delayed by nearly two years), so I can't help but wonder what got lost on the cutting room floor.  But what remains is a hodgepodge of uninvolving characters, a simple but rambling narrative, and a few brief action scenes of such quality to make you downright angry they there aren't more.

The Wolfman looks great and has a few fun supporting turns by grizzled veterans who are clearly in on the joke.  But there is maybe just fifteen minutes worth of admittedly terrific werewolf set-pieces, leaving the rest of the running time to characters we can't care about and a plot we can predict from the first frame.  Rare is the picture that leaves me wanting more gratuitous action and trashy violence. But since that's really the whole point of seeing such a picture, one can only sit and wonder why Joe Johnston and/or Universal thought audiences wanted more of Blunt and Del Toro's halfhearted brooding and less hairy carnage.