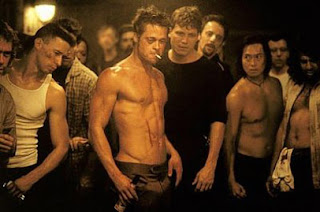 Even ten years later, I remain puzzled and annoyed by the critical community's welcome embrace of American Beauty and shunning of Fight Club. They both deal with many of the same themes and cultural ideas. Yet American Beauty allows the flawed anti-hero to die a 'tragic' death and escape having to deal with the consequences of his actions (deleted scenes imply that he still goes to heaven). While the allegedly immoral and dangerous Fight Club ends with Tyler basically admitting he screwed up and taking a baby step to do better (of course, most Fincher films deal with characters finally accepting and welcoming personal responsibility for their poor life choices).

I actually love both films, but I haven't seen American Beauty since 2001 or something. Damn. Thanks for reminding me. I'm gonna watch it again soon.

FIGHT CLUB is such an amazing film. It goes to prove that just because a film flopped at the B.O, it doesn't mean it's a bad movie.

The chemistry between Brad Pitt and Edward Norton was really strong, and the surprise ending was as shocking as The Sixth Sense. This movie is a classic!

Love films like this and the usual Suspects etc