A passive, borderline useless hero - Why Goldfinger kind of stinks... 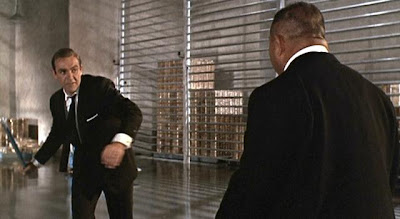 I watched Goldfinger for the first time in several years the other day. It still holds up as a fun, well-paced, and entertaining 007 caper. But, there is one glaring problem that almost by itself puts it near the bottom of the Bond totem pole: James Bond is helpless and useless for most of the picture.

A quick recap... James Bond spends the first half of the picture basically playing chicken with Auric Goldfinger, shenanigans that result in the violent murders of two young women (the Masterson sisters - one gets painted in gold and the other gets her neck broken by a flying derby). By the halfway point, James Bond has been captured by Mr. Goldfinger and spends nearly the entire rest of the film in enemy custody. While in Goldfinger's grasp, his life is spared only because Goldfinger doesn't call his bluff about outside knowledge of 'Operation Grand Slam'. Bond learns the gruesome details of the plan, one that involves the mass slaughter of 60,000 people and the detonation of a nuclear bomb inside Fort Knox. But James Bond does not foil this plot. James Bond does not switch the nerve gas canisters to instead release harmless gas on the populace. Pussy Galore is the one who switches the canister and calls the CIA (Bond had tried to warn Felix Leiter, but his plan to smuggle a message out with a doomed mob boss failed). He does not deactivate the nuclear bomb, that is done by a nuclear expert and Felix Leiter right before detonation. He doesn't really even defeat Goldfinger, but rather Auric seals his own fate during his brief fight with Bond, by blowing a bullet hole through a window in his airplane and being sucked out.

Throughout this third 007 movie, James Bond is a passive observer and the day is saved primarily through happenstance, convenience, and the work of his allies. It's convenient that Pussy Galore is willing to switch sides after a single (literal) role in the hay with Bond. But was Bond really willing to bet the lives of tens of thousands on his charms? It's convenient that the CIA is able to break into the sealed Fort Knox vault and dismantle the bomb, but what was Bond going to do if the CIA hadn't rode to the rescue? Sure the fiendish plot is foiled, but James Bond is basically a bystander in his own adventure. Aside from killing Odd Job, James Bond does little or nothing to help prevent the scheme to radiate the gold supply in Fort Knox.

Is the film still fun and exciting? Is the dialogue still witty and the action still entertaining? I suppose so. But the inherent plot flaw, the storyline that basically has your hero sitting by the sidelines as the plot unfolds right next to him, does nothing so much as render James Bond as impotent and recklessly incompetent. This is even worse than the core problem of the 1st, 3rd, and 4th Indiana Jones movies. While those films suffer from outcomes that wouldn't have been altered had Indiana Jones just stayed in bed (ie - the bad guys would have found the fabled item, used it in the wrong way, and doomed themselves just the same), at least Jones can take credit for saving the lives of friends and family along the way (Marion in the first film, his father in the third film, and Marion, his son Mutt, and Professor Oxley in the fourth). Here, not only is James Bond helpless to prevent widespread carnage, his interference actually causes the murders of innocent bystanders. Personally, I prefer James Bond to actually be competent and able to foil the evil plans of various super villains and warlords. But that's just me.

Why should Bond be Superman?
What you are complaining about is what makes Goldfinger the Best of the Bond films IMHO.