How Marvel can do right - cast Jon Hamm as Captain America 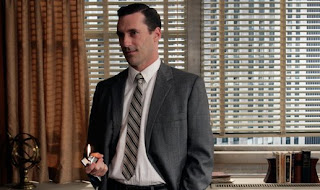 I didn't get to see Mad Men till just before the first season came out on DVD/BluRay. Everything you've heard about the show is true. It really is that good. And Jon Hamm is truly the real deal. The idea occurred to me when I first started watching, but since I had not seen him in anything else I was reserving judgment. Well, last night he did a smashing job hosting Saturday Night Live, anchoring what was easily the best all-around show of the season (go here for clips). So yes, without further hesitation, let us state the obvious - Jon Hamm would make an ideal Steve Rogers.

He obviously has the look. Tall, somewhat muscular, handsome, with a genuine masculinity that is nearly absent from the male stars of today. His deep, baritone voice only helps a visual that just screams 1950s superhero more so than anyone since Bruce Campell in the late 80s/early 90s (and, no offense, Hamm is a better actor). If they ever reboot Superman yet again, and if Warner has the decency to cast someone who is old enough to shave, the guy would make a perfect Clark Kent. But, being realistic, there is another vacancy in the super hero film world that he would be just as appropriate for. Most importantly, his commanding presence would make the Steve Rogers scenes just as compelling as the Captain America action scenes.

I'm not the only person to say this, and I may not even be the first to write about it. But that doesn't mean it doesn't make an obscene amount of sense. He is a consummate actor, a genuine screen presence, he can do drama and comedy without breaking a sweat, and he's unknown enough to not produce comparative snickers when he puts on the suit. And, perhaps most importantly to Marvel and co, he's probably gonna come really cheap to boot. Why spend $20 million on Brad Pitt when you can have Jon Hamm for $1 million?

To paraphrase The West Wing, Jon Hamm may not be their first choice... but he should be their last choice, because he's the best choice. This is the climactic bit from the season 01 finale of Mad Men, but it's not technically a spoiler.
Scott Mendelson
Posted by Scott Mendelson at 11:42 AM