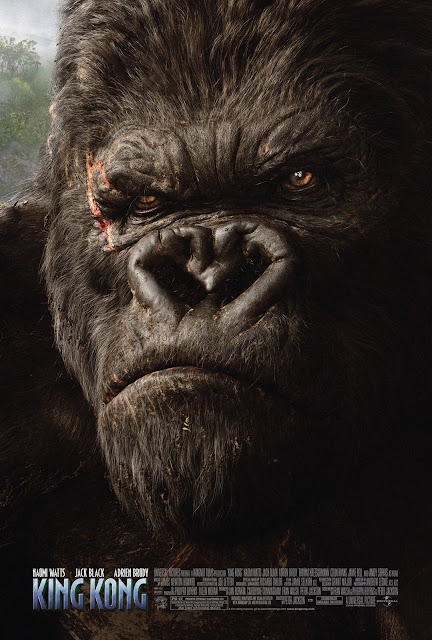 
Peter Jackson’s King Kong is a complete joy; a ripping yarn that refuses to let the audience settle for less, both in technical and artistic achievements. At its best, it has the showmanship to remind you of how you felt while watching your favorite adventure film from childhood. It’s not perfect, but its flaws are ones born out of risk, imagination, and the willingness to swing for the fences in an age when all too many filmmakers settle for a ground rule double.


Based on the 1933 horror classic, a quick montage sets the scene in Depression-era New York. An unlucky Vaudeville performer (Naomi Watts) is tricked into joining a voyage to Skull Island with moviemaker Carl Denham (Jack Black) and his unwilling screenwriter Jack Driscoll (Adrien Brody). Upon arrival, Ann is immediately abducted by the locals and presented as a sacrifice to their resident twenty-five foot gorilla, known as Kong. While Carl and his team battle all manner of horrors to rescue their starlet, Ann finds herself alone on the island, with only Kong to protect her. He starts to see her as the only thing on the island that doesn’t fear him or wish to hurt him, while Ann comes to see him as the great pet that she never had, with all the fondness that that entails.

The few flaws must be addressed. The film is about 20 minutes too long. In particular, the ‘crash landing’ on Skull Island and the climax of the Skull Island sequences feel padded, lessening their emotional and visceral impact. There are several forced nods to the original film that don’t quite gel. Finally, a certain major character’s arc seems to naturally be leading to their death, but because he survived in the original, he lives here and his final line is completely out of character for this particular interpretation. By nearly every other standard, King Kong is top-notch. The writing is witty and sharp, with several clever lines of dialogue (the initial meeting of Ann and Jack is particularly funny) and several wry pokes at show business (Jack, the screenwriter is literally stowed away with the animals and forced to write in a cage).

The atmosphere is consistently one of dread and horror. For the entire first hour, amidst the character development and set-up, there is a constant sense of impending doom, which climaxes with the horrifying first encounter with the Skull Island natives (in the original, they were relatively racist ‘savage’ caricatures, but here they are merely indigenous people driven completely insane with fear from living in this terrible place). The rest of the picture is genuinely scary and savagely violent when needed, so parents are warned. This film earns its PG-13.

The acting is terrific across the board. Watts is the emotional center of the film and Brody is fun as the screenwriter turned reluctant adventurer. The rest of the crew is well drawn and sympathetic, so you’ll know whom you’re mourning when some of them perish. Even the usually annoying Jack Black gives a restrained performance, allowing Denham’s Ahab-like zeal for fortune and glory to slowly overtake his very soul, until he resembles a near murderous Orson Welles.

The action scenes are literally astonishing. I won’t describe them as the less you know the better, but they do detail and expand on sequences from the original film (especially the gross-out highlight, which is actually a deleted scene from the original). Such is the awe-inspiring nature of the main set pieces that some may be reminded of the wonder that they experienced when they first saw Jurassic Park twelve and a half years ago. Technically speaking, THIS is the next benchmark for special effects and adventure filmmaking. Lastly, one must mention Andy Serkis, who delivers a genuine acting triumph as the titular 25-foot gorilla. Yes, Kong is physically a CGI creation (and a flawless one at that), but every gesture, footstep and grunt is Serkis’s.

King Kong is a terrific entertainment. It’s big, messy, occasionally flawed, occasionally overdone, but utterly captivating in its old school romantic zeal. It’s the best kind of flawed movie; one that is flawed because it reaches for the sun but merely reaches a nearby star. Peter Jackson honors the original and improves on it in many ways, and in his zeal to make a bigger, more emotional, more openly daring blockbuster; he honors the adventurous moviegoer in all of us.

Love you're reviews Scott, but the closest star is the sun :)

If you reach for the sun, but merely reach a nearby star, aren't you reaching out above and beyond the sun? The next nearest star is over 4 light years away, while the sun is about 9 min (traveling at the speed of light, of course). Just saying. Good movie